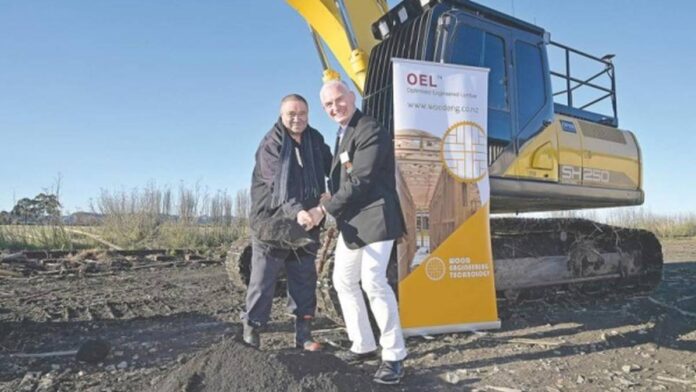 Gisborne is the center of a potential $ 200 million “revolution” in timber processing and housebuilding in New Zealand after the official opening of a world’s first factory.

The plant is the only one of its kind in the world. It manufactures Wood Engineering Technology’s revolutionary OEL product, which is one of seven engineered wood products ever released.

OEL is made from thin strips of wood butted together and laminated together. By laminating the wood, the rigidity and strength are improved and allow the use of low quality, small diameter logs for a high quality structural product.

Wood Engineering Technology (Wet) director and founder Tony Johnston said the lumber produced would only be destined for the domestic market.

“Today was a celebration that we have reached a fully operational level. He serves customers and does what we wanted him to do.

“Probably more important is what we learned from this factory… and now we have the funds available and have made a number of decisions on how to dramatically improve the process. We are now ready to start implementing this second phase.

“This second line will have a little more than twice the capacity. It will be about 50 yards longer, but it will do the same things, but in a more efficient way.”

The company raised $ 30 million through a combination of the Provincial Growth Fund and private investors to build the new line.

Two more factories, each with two production lines, were also planned for Gisborne as part of a $ 200 million expansion plan.

“We don’t have that funding at this point, but like all of these types of projects, it will attract funding as people see its usefulness, usefulness and profitability,” said Johnston.

When completed, the Gisborne site will have six production lines producing up to 140,000 cubic meters of OELV – enough for over 11,000 homes – and employing over 130 people.

Wet chairman Angus Fletcher said the Gisborne plan was “the biggest development in wood processing in over 30 years”.

“Our disruptive technology turns untreated logs that would otherwise have gone overseas into an innovative and high-value product. And it does it in a fully automated, artificially intelligent robotic factory in under 12 hours while creating skilled, higher paying jobs. in our regions – New Zealand innovation at its best. “

Minister of Economic and Regional Development and Minister of Forests Stuart Nash was in Gisborne yesterday to inaugurate the OEL production line.

Nash also laid the foundation stone for the company’s second production line, which will begin construction in six months and take about 20 months.

“This is really important in terms of driving the type of houses we want to build. They will no doubt work with Kainga Ora, and other contractors, because if you are building for the government, it has to be built of wood, and it meets specifications. “

Nash said the development of the second line and the company’s plans for more factories here would help increase the region’s wealth.

“These guys pay fantastic money. These are highly skilled jobs. You get $ 500 per hour of production – that’s huge productivity and it happens here in Gisborne.”

Nash said the government provided around $ 10 million in concessional loans and also worked closely with the company to ensure this could happen for several years.

“To see him in full production is just fantastic. It’s a revolution.”

He also praised the regional economic development agency Trust Tairawhiti (formerly Activate Tairawhiti) for having “the cojones” invest around $ 20 million over the years, following an initial investment of $ 4.7 million. in 2016, which established the Gisborne plant at Excellence’s Prime Wood Cluster Center in Matawhero.

Trust Tairawhiti Director General of Economic Development, Richard Searle, said: “Trust Tairawhiti is pleased to have invested alongside Wood Engineering Technology to continue to increase our log processing in the region to create new jobs in the region. high added value and strengthen our economic resilience to fluctuations in international log markets. “