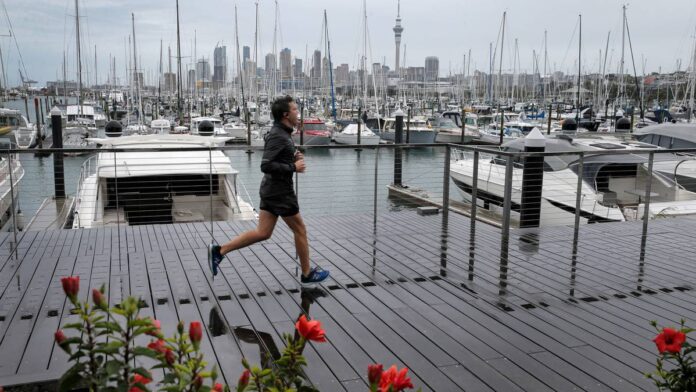 North Island kiwis are waking up to a wet and dreary Saturday. Photo / Alex Burton

Kiwis are waking up on a damp and dreary Saturday morning across much of the country, as heavy nightly falls have resulted in the cancellation of some children’s sports competitions in Auckland.

And the MetService warns that the worst part is to come with more heavy rains with the risk of thunderstorms.

Children’s football in Western Springs, in the mid-west of the city, was among canceled competitions affecting hundreds of families, with organizers reporting surface flooding and continued rains this morning.

Motorists have also been warned to be careful on roads which are expected to become slippery and with reduced visibility throughout the weekend as heavy rain watches came into effect for much of the eastern part of the country. North Island.

An intense period around 10 a.m. could still dump as much as 25mm over Auckland before a short lull in the falls came just after noon, the forecaster said.

Residents of Whangarei woke up to the continued rain early this morning, but it was expected to subside in the afternoon as the town peaked at 20C before another period of heavy falls was likely tonight.

Heavy rain was also in place for the Coromandel, where Whitianga expected consistent falls through Saturday with a high of 18C.

Tauranga and the Bay of Plenty were also heading for a heavy rain warning period that was to extend until 11 a.m. on Sunday.

Residents of Tauranga could expect a high of 16C and precipitation throughout Saturday with heavier gusts between 11 a.m. and 2 p.m., MetService said.

Rotorua could expect rain to accumulate throughout the morning as it made its way to a cold 12C high.

The front bringing the rain should then slowly descend the country towards Napier and the coast of Wairarapa where weather watches were in place from tomorrow.

Wellington residents, meanwhile, were waking up to pouring rain that is expected to subside until Saturday as the city headed for a high of 12C.

However, stormy and wet weather would hit the capital from tomorrow.

Blenheim and the Kaikoura coast are also said to be subject to heavy rains from tomorrow as the storm also hit the area.

Elsewhere in the South Island on Saturday morning, waking Christchurch residents could expect downpours and highs of 9C before patchy drizzle took over in the evening.

Dunedin could also expect occasional downpours and drizzle and a high of 7 ° C.

Queenstown, meanwhile, was to be kept dry, but residents were waking up to frosts and freezing temperatures of -1C, MetService said.

Credit to Springbok coach Jacques Nienaber for NOT blaming Covid and...

The secret ‘Pact of oblivion’ and the suppression …

Siya Kolisi deplores the loss of high balls: we will fix...