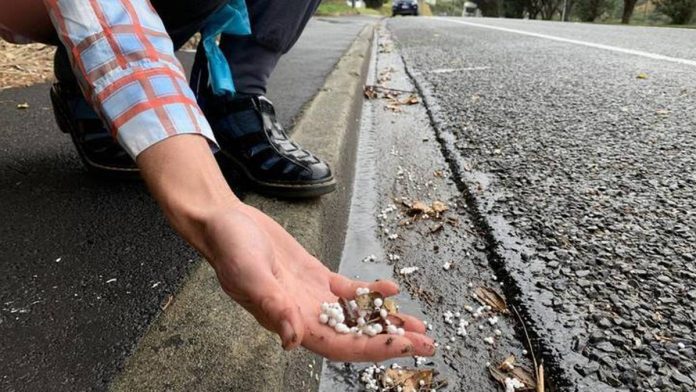 Wellington City Council fined $ 200 after an “irresponsible” driver allowed a load of styrofoam balls to scatter over 7 km of Wellington’s south coast, including a marine reserve.

“We were alerted to a widespread scattering of polystyrene beads on the south coast last week by a number of complaints to our contact center, one of which obtained the registration number of the offending vehicle,” said said a spokesperson for the council.

“We immediately got our street cleaners out, but to our frustration and that of the local community, a lot of bullets had already hit beaches and marine areas.”

Residents were furious at the pollution, which may have been thrown into streams, sewers and the sea.

Polystyrene is not biodegradable.

Jade Lorier, a resident of Whiro Bay, said she was “really worried” about the health of the nearby creek.

“We have native eels, as well as fish, I’m worried about the wildlife in the marine reserve,” Lorier said. “We’re trying to protect and restore this area, and it’s just an absolute nightmare for the south coast.

“I would like this person to be held responsible, it’s an environmental disaster. I am furious.

The incident sparked an uproar on local Facebook groups for action against the continued pollution blown up by three nearby landfills on Happy Valley Rd, and by unsecured charges being driven there.

Lawyer Adam Holloway was among those cleaning the polystyrene and said there was “constantly fresh trash” blown across the street and coastline.

“I’m sure we don’t have them all, and the next time it rains, whatever is left will flow down the gutters, and from there to the creek, and from the creek to the marine reserve.”

A man who asked not to be named told RNZ he spotted the driver as they were losing styrofoam. He followed the trailer to the point on Happy Valley Rd, where he confronted the driver, telling him he had to cover his load and the bullets he was losing could kill fish.

He then reported the incident to council.

“The beans were blowing like it was Christmas. [The man driving] was an entrepreneur, but he should know better, he could have covered his load.

“Polystyrene is the worst product ever, it’s so bad for the environment… and there are millions of it.

Wellington City Council infrastructure manager Tom Williams said the source of the trail of polystyrene beads was found using CCTV footage and officers were considering action under the Act. waste.

“The person in question has come from Lyall Bay to Ōwhiro Bay, and there has been polystyrene all along that coast. It’s a beautiful maritime environment, and one act of stupidity can ruin it for everyone. world. “

The council spokeswoman said details of the offender had been passed to the public health team, who immediately tracked down the culprit and processed a $ 200 fine under the waste law.

The Council posted an article about the incident on social media, reminding people to cover their charges to avoid such incidents.