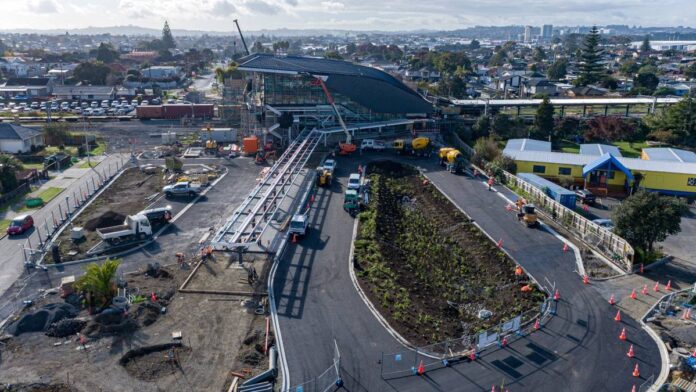 A contract has been awarded for the new interchange at Puhinui railway station, the work of which will begin in October.

A $ 69 million project to modernize and significantly expand a South Auckland station opens to the public this weekend, before entering service from Monday.

Puhinui Station between Manukau and Papatoetoe has a new station building, but a bus interchange has been added to make it a new transport hub.

An open day will take place today from 11 a.m. to 3 p.m. The screens will display information on the design and construction of the station.

Representatives from Auckland Transport and Jasmax will be available to answer questions from people on the new facilities, design, construction and uses.

Transport Minister Michael Wood and Mayor Phil Goff are to open the station before the public are invited into the building.

The station was designed by Aurecon and Jasmax and built by a McConnell Dowell / Built Environs joint venture.

The station has space for more platforms and the third and fourth KiwiRail rail lines.

Peter Engstrom, of Jasmax, said the project has converted what was a small suburban station into a substantial and future-proof rapid transit interchange to connect buses to trains.

The internal ceiling covering was Innowood, composite wood panels made from a by-product of sawmills, Engstrom said.

The aluminum-clad building wraps around both rail tracks, so there’s no need for a walkway over the lines like many other stations, Engstrom said.

All public spaces are naturally ventilated by the geometry of the roof and walls. Air conditioning is only needed in some internal pods where there are staff facilities, a store, offices and bathrooms.

In 2019, the Herald announced that the project was to cost $ 60 million, of which 75% was funded by the government and the rest by the Auckland Council and the regional fuel tax.

AT says Puhinui Rd station is now a similar interchange to Otahuhu, Panmure and Manukau stations and connects Auckland Airport by bus and a 10 to 12-minute journey.

McConnell Dowell said the new station extended the platform about 19m to the north and had a new elevator from the lobby.

The use of natural light has been maximized, the architect said.