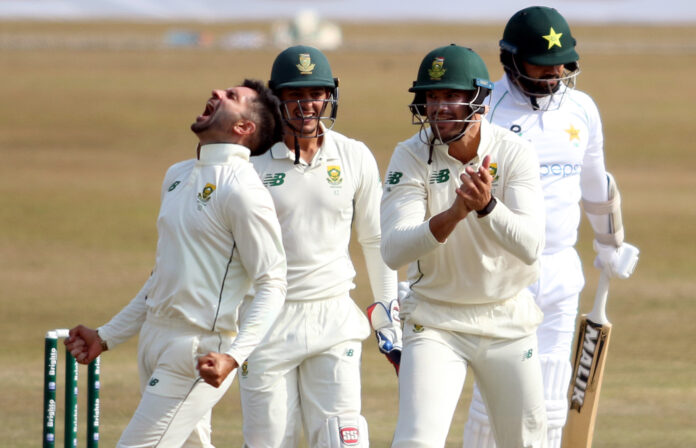 June 21 (Reuters) – Keshav Maharaj was too excited to host a celebration after becoming the first South African to win a try-out hat trick in 61 years as his side went on a 2-0 series sweep against the West Indies with a 158- run victory in Saint Lucia on Monday.

The left-arm spinner picked up five wickets in the second round of the West Indies, but it was his hat trick that will be long remembered, especially as the hosts began to believe they could achieve their goal. of 324 races. .

They had come down to 107 for three after a poor start when Maharaj (5-36) claimed the scalp from dangerous Kieran Powell (51), who tried to throw it to the limit of the midwicket but chose lone outfielder Anrich Nortje.

Versatile Jason Holder was caught by Keegan Petersen’s first short-leg ball, and Wiaan Mulder had an excellent low diving catch to his right at Joshua Da Silva’s leg slip to complete the hat-trick.

“Powell was looking to come over to me and I just thought about putting the ball in the right area and he found Anrich on the edge,” Maharaj told reporters.

“The second to Jason, I was trying to launch a drop ship and luckily he had an inside advantage.

“The hat-trick ball, I had so much in mind to know where to put the ball. In the end, I just played it normally and Joshua followed it all the way to the bottom and all credit to Wiaan for a nice catch.

“I didn’t know what to do (to celebrate), I thought about doing a toboggan but ended up stopping dead. There was too much excitement and adrenaline in me.

It was only the second test hat trick for South Africa after fashion designer Geoff Griffin pulled off the feat against England at Lord’s in 1960.

They won their first round of away tests in four years, as they begin a new era under the leadership of newly appointed captain Dean Elgar.

“There are a lot of positives to take from the game, but there are also obviously a lot of things we need to work on because there is always room for improvement,” added Maharaj.

“But there is a good buzz in the locker room and a sense of pride.” (Reporting by Nick Said; Editing by Ken Ferris)