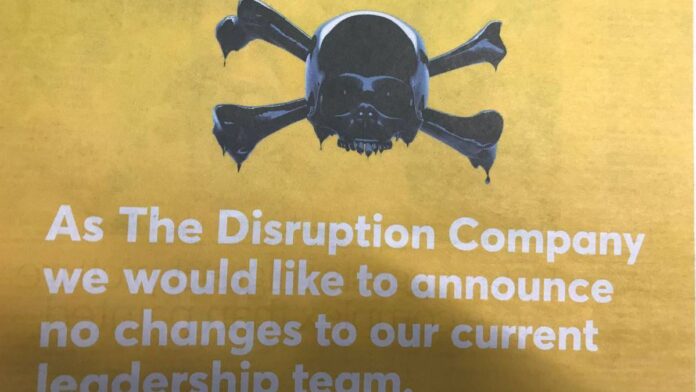 One of the country’s best-known agencies released a full-page Herald ad to poke fun at the current chaos in the industry.

At a time of major changes at a number of larger agencies in the city, the announcement from the TBWA agency highlights that there has been no change in their current management team.

In the announcement, TBWA, which masquerades as the “agency of the disruption,” notes that “while we believe that the disruption gives an unfair advantage to our clients’ businesses, we would like everyone to know that when ‘it’s about people, it’s about stability.

The announcement then goes on to say that agency executive director Catherine Harris and creative director Shane Bradnick are still available on their regular numbers.

The announcement comes on the back of a busy period of leadership changes, which culminated last week with moves to the top of three major agencies and one at the holding company level.

Suffice it to say, it has been an extremely busy time in the advertising industry following the Covid-19 period.

While TBWA’s tongue-in-cheek advertising is directed at the advertising industry, the multitude of recent leadership changes are not confined to just one industry.

MacLeod completes a clean sweep of retirement village CEOs in a short period of time, following Bill McDonald of Arvida earlier this week, Earl Gasparich of Oceania (at Metlifecare) in March and Julian Cook of Summerset at the end of the ‘last year.

It seems that while many companies and leaders have stopped to make big changes over the past year, the steady return to something that looks like normal has led many to decide that it is now okay to act. .

However, it makes you wonder who might come by next.