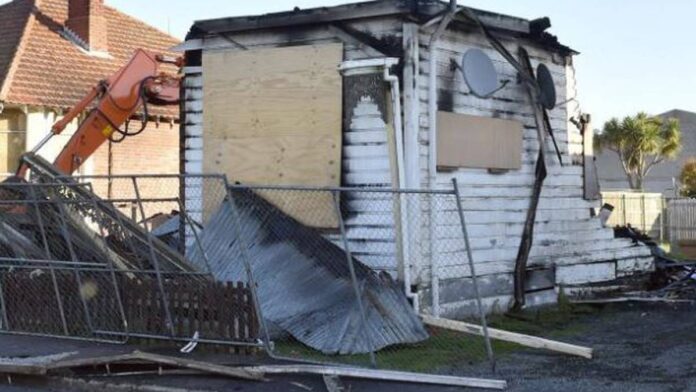 The bodies of Anastasia Margaret Neve and David Ian Clarke (49) were found inside the Wesley St property in 2018. Made with funding from NZ On Air. Video / The South Today

A man used a sledgehammer, cricket bat and knife to murder a Dunedin couple before setting their house on fire, a court has heard.

Wiremu Paul Namana has undergone name suppression for almost three and a half years, but he can finally be unmasked as the man who killed David Ian Clarke (49) and Anastasia Margaret Neve (35) at their home in Wesley St in 2018.

The 49-year-old pleaded guilty under shock to two counts of murder and arson when he appeared in Dunedin High Court yesterday for a routine preliminary hearing.

Court documents were eventually released which showed Namana had an intravenous drug addiction that became increasingly severe until 2017.

He was a regular morphine user and had incurred drug debts around Dunedin, Crown Prosecutor Robin Bates said.

It was through this that he met Mr. Clarke and Ms. Neve, “low-level drug traffickers” who had occasionally supplied him with illicit substances.

On the morning of January 21, 2018, Namana texted a friend to say he was “hanging out”, a common phrase describing the onset of withdrawal.

That evening, he made two attempts to call Ms. Neve, without success.

He then contacted a friend, breathing heavily and looking bored, and said he felt like “knocking on the door”.

Soon after, he entered the home on Wesley St and launched a devastating attack on the two residents.

The court heard that Namana used a knife, cricket bat and hammer to inflict a series of horrific injuries, the list of which spanned two pages of the summary of the facts.

Ms Neve suffered 14 stab wounds as well as several broken bones to the head, while Mr Clarke was stabbed in the head and neck so profusely that he allegedly caused “torrential bleeding”.

An autopsy found various fractures and burns to 80% of his body.

Namana got rid of the weapons and in the early hours of January 22 he returned with gasoline which he poured into the victim’s room before lighting the fire.

It was only a few hours before the police focused on Namana, after witnesses said they heard his motorbike leave the house.

Initially, the accused was only prepared to admit seeing the couple earlier on the day of their deaths, but his story changed almost daily as he repeatedly made conflicting statements to police.

On January 27, he told Detective Dave Checketts that he had been inside the property and found Ms. Neve with her head “smashed”.

He claimed he was not responsible and said he was being honest because he feared forensic evidence linking him to the scene.

In the end, he did more than that.

“Sitting on the pants was a piece of victim Anastasia Neve’s flesh,” the summary said.

The Wesley St apartment was finally demolished after someone set it on fire again in May 2018.

Namana also appeared in Dunedin District Court yesterday on domestic violence charges, but the Crown presented no evidence and the charges were dismissed.

He received a first strike warning under the Three Strike Act and will be sentenced in August.