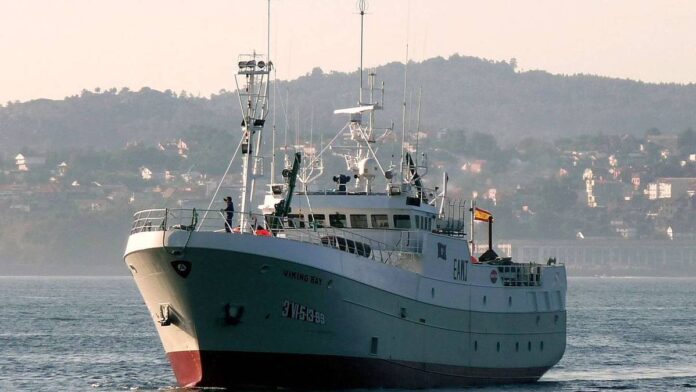 Auckland ports have agreed to allow the ship with two Covid-19 positive sailors on board to access its quarantine anchorage.

The company said it would not take the Spanish-flagged fishing vessel Viking Bay “to port” but allow it access to its quarantine anchorage near Rangitoto Island.

Auckland Ports spokesman Matt Ball said if Viking Bay needed to bring people ashore it would have to be done via another small transfer vessel arranged by the ship itself.

“The Ports of Auckland have just received a request for Viking Bay to come to Auckland,” Ball said.

“If the ship came to Auckland it would not dock in the port but would go to one of the two quarantine anchorages available in Auckland.”

On Tuesday, the Ministry of Health confirmed that two sailors aboard the boat – which was off Taranaki – had tested positive for Covid-19.

Yesterday, Port Taranaki said it would not allow the ship to return to port, as this would put staff and the community at “higher risk”.

Today, the Ministry of Health confirmed that one of the two infected sailors had the Delta variant of Covid-19 and that genome sequencing has shown that this infection is not linked to any other cases in New Zealand .

A whole-of-government response had been put in place, led by Customs and comprising health officials, border agencies, port authorities and the shipping company, to address the health needs of crew members and determine next steps for vessel.

New Zealand Customs would not comment on Auckland Ports’ offer to take the ship to its quarantine anchorage – but said that once an agreement was reached to find the ship a place to dock, the fishermen would undergo Covid-19 tests and move to an MIQ facility.

Craig Harrison of the Maritime Union confirmed that the infected couple were on Viking Bay flying the Spanish flag.

“Our concern now is for the crew,” he told Newstalk ZB.

“It wouldn’t be much fun [for] the crew of a small fishing boat – everyone tells them to isolate themselves. “

Health officials continued to view this situation as posing a low risk to public health due to the infection prevention process in place.

There are no associated places of interest.

Meanwhile, a new case of Covid in managed isolation was reported today.

The last person to arrive in New Zealand and test positive for Covid came from Russia on July 6.

They tested positive on arrival and were in a managed isolation center in Auckland.

There are now 41 active cases in New Zealand.