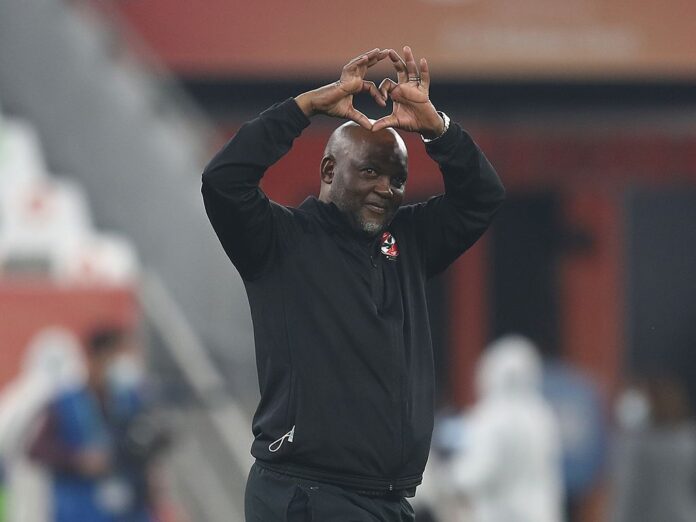 South Africa Under 23 coach David Notoane has rented Al-Ahly mentor Pitso Mosimane, claiming that his compatriot has done a great job since arriving in Cairo.

Mosimane won his fourth title with Al Ahly after the Reds won the CAF Super Cup against RS Berkane, having already won the Egyptian Premier League title, the Egyptian Cup and the CAF Champions League.

The CAF Super Cup also marked Al Ahly’s seventh Super Cup trophy, the largest in Africa, and Mosimane’s fourth continental title, as he has already won the Champions League and the Super Cup. with Mamelodi Sundowns.

Despite his success, Mosimane has been the subject of much criticism, especially from Egyptian pundits who believe his playing style is unsuitable for the Red Devils.

David Notoane, however, believes Mosimane’s tactics have worked perfectly for the Reds and expects him to be even more successful in the future.

“Mosimane’s strategy with Al Ahly has been successful, and he needs time to instill his philosophy in Al Ahly players,” Notoane told OnTime Sport TV.

“There is little difference in his method with Al Ahly compared to the one he had with Mamelodi Sundowns.

“I played under Mosimane for years and we were in constant contact. I have a strong relationship with him and I am grateful that he made me part of the Sundowns team.

“What happened to Mosimane in South Africa in the last game is unacceptable”, he concluded.

Notoane currently has his hands full at the helm of the SA Under-23 squad which were beaten 2-0, 3-0 by their Egyptian counterparts in two warm-up friendly matches for the upcoming Tokyo Olympics.

Notoane’s worry will be the fact that his Under-23 team failed to find the back of the net in either game while conceding up to five goals.

South Africa and Egypt, as well as Ivory Coast, are the three African nations that will represent the continent at the Olympic Games in Tokyo, Japan.

South Africa were drawn in Group A alongside Japan, Mexico and France.

Egypt have been drawn in Group C with Spain, Argentina and Australia, while Côte d’Ivoire will play Group D with Brazil, Germany and Saudi Arabia.

The Tokyo Olympics football tournament kicks off on July 23.