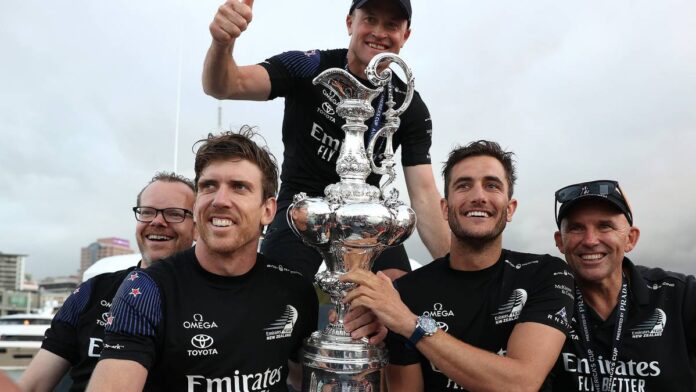 New Zealand team boss Grant Dalton will brief members of the Royal New Zealand Yacht Squadron next week on negotiations for the next America’s Cup, amid rumors of a possible legal challenge if an attempt is made to remove him from New Zealand.

On Tuesday evening, Dalton is due to meet with members of the squadron alongside Commodore Aaron Young, just two days before the period of exclusive negotiations with the government expires.

Young said the meeting was a forum to “give members an update on what has happened over the past few months.”

The meeting allowed members to discuss the possibility of moving the Auld Mug, the world’s oldest international sports competition, abroad.

Even before Team NZ beat Luna Rossa to win the 36th America’s Cup in March, the union had already confirmed that they were planning to compete in the next offshore regatta, with documents suggesting they were seeking interest from cities across the country. whole world.

The victory in March launched three months of exclusive negotiations with the government on a new defense in Auckland.

But the talks seem to have stalled. While both sides declined to comment as good faith negotiations were underway, the Herald was told that negotiators appointed to represent the Crown in talks with Team NZ were told their offer had not been made. detention.

Whether Team New Zealand can host the offshore event appears to be the subject of debate among lawyers.

Team New Zealand was formed for the pursuit of the America’s Cup RNZYS, which was established in the 19th century and raced between yacht clubs.

An Auckland lawyer said he was of the opinion that the decision on the location of the America’s Cup was not something that could be delegated by the RNZYS under the deed of donation which sets the rules for disputes.

The lawyer considered that a number of law firms may have provided similar advice to RNZYS, but declined to discuss the situation publicly, as it could jeopardize attempts by some squadron members to ensure that the America’s Cup stays in New Zealand.

Young suggested that the future location of the Cup was a decision to be made “together” by the squadron and the union. His preference remained to keep the event in Auckland.

“The squadron is the administrator of the America’s Cup, but there is an agreement that the squadron had and has with our representative team, Team New Zealand, and so it’s really a decision that we all make together. “Young said.

“We have always said that we would like the event to take place in New Zealand. I don’t think we have covered this up. We have to work on this process and see if we can make it happen.”

Young had heard of possible legal challenges, but nothing had been raised directly with him.

“There are a lot of opinions. Ultimately the squadron has an agreement with Team New Zealand and we will work together to try to find the best outcome, not only for the event, but the best chance for us to. keep the America’s Cup.

“I’ve heard a lot of stories but no one has told me anything specific, but the squadron has their own legal advice like any business probably does.”

A spokesperson for Team New Zealand said Dalton would brief squadron members on the negotiation process, as he had done throughout the process. This would not include discussing the outcome of negotiations with the Crown “because it is before the end of the exclusive negotiation period”.