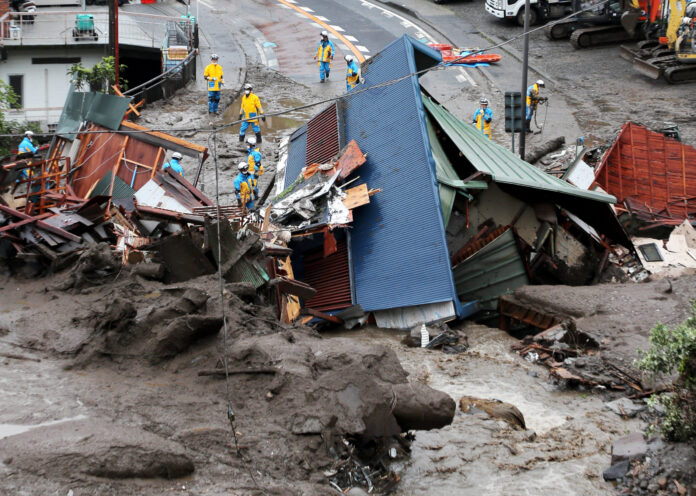 At least three people have been killed in the seaside town of Atami after torrential rains over the weekend triggered a succession of landslides to send torrents of mud and rocks ripping streets in part of the town. In some places, more than the usual July of rain fell in just 24 hours.

Torrential rains and landslides are reminiscent of natural disasters – including earthquakes, volcanic eruptions and the tsunami – that haunt Japan, where the capital Tokyo is due to host the Summer Olympics starting this month – this.

“We want to save as many victims … buried under the rubble as soon as possible,” Prime Minister Yoshihide Suga told reporters, adding that the police, firefighters and military were doing everything to do so.

The third person has been confirmed dead in the resort town of Atami 90 km (60 miles) southwest of Tokyo, where 113 people are missing, spokesman Hiroki Onuma told Reuters.

This fatality was a woman, the Kyodo news agency said.

“We are in contact with various groups and are advancing research,” said Onuma.

Over the weekend, around 20 people were reportedly missing, but their numbers rose sharply on Monday as officials began working from residential registers rather than phone calls from people unable to reach members of their family. family, he said.

About 130 buildings were affected on Saturday morning when landslides ravaged Atami, a hot spring resort on a steep slope that leads to a bay.

Water, mud and debris reportedly flowed along a river for about 2 km to the sea, local media said.

“My mother is still missing,” a man told NHK public television. “I never imagined something like this could happen.”

Although Onuma said the rain has stopped in Atami for the time being, further forecasts are expected, increasing the possibility of further landslides.

“The situation is unpredictable,” he said. (Reporting by Daniel Leussink and Elaine Lies; writing by Elaine Lies; editing by Kim Coghill and Christopher Cushing)