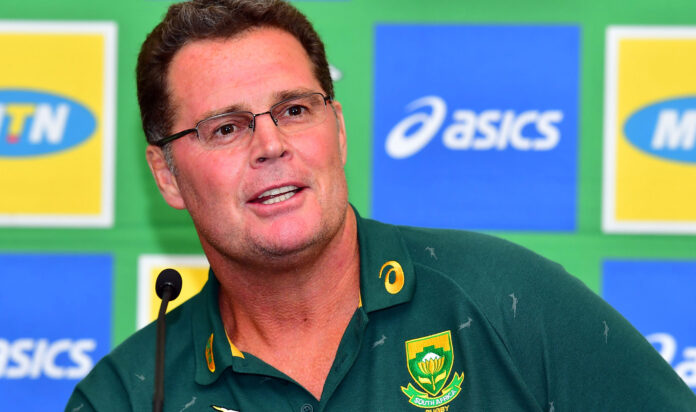 In preparation for the first test of this difficult series between the Springboks and the British & Irish Lions, it was the tourists who used the media to verbally prick their hosts.

Lions coach Warren Gatland said his team damaged the Boks’ ego when his team lost 17-13 to the virtual Test-force SA “A” team. It was an odd claim for a team that had just lost, but it was in keeping with the Lions’ strategy of trying to sow doubt in the minds of the Boks and officials.

Gatland has started to criticize Rassie Erasmus’ role of “waterboy” for the Springboks, even though the Boks have not broken any World Rugby rules. Erasmus certainly delivers messages on the pitch, just as Lions coach Neil Jenkins is for his team, but Lions somehow see him as different.

Later, at least three UK media outlets reported that Gatland was ‘furious’ at the appointment of South African Marius Jonker as TV match official (TMO) for the first test. This appointment was a World Rugby decision made because the original TMO, Brendon Pickerill, was unable to travel due to Covid restrictions.

Gatland was not directly cited, but the stories in various British publications were remarkably similar. It might even lead to the conclusion that it was provided to some sympathetic media.

The Lions have questioned Jonker’s “neutrality” because he is South African. The only conclusion to be drawn from these stories is that the Lions tacitly accused Jonker of bias. Maybe even prejudices. It didn’t matter because the message was loud and clear – if there were contentious decisions against them, tourists might fall back on ‘we told you so’.

As it turned out, the Jonker under pressure made two crucial decisions that went against the Boks. Did that change the outcome of the 22-17 defeat of the world champions? Who knows, but what is clear Jonker was in an unpleasant position and dragged by World Rugby who offered no support or protection.

It is important to remember that SA Rugby did not name Jonker and was not responsible. Jonker didn’t name himself either. It was a shock from World Rugby that the mother’s body still refused to explain. They should have publicly berated Gatland and the Lions for their outburst, expressed support for Jonker, and acknowledged their mismanagement of the bigger picture.

Instead, World Rugby’s media department continues to poke fun at the Olympic Sevens while sleeping behind the wheel, or willfully dodging any responsibility for the Jonker-gate.

It was therefore Erasmus who decided to respond via social networks via his Twitter account, and possibly via a burner account belonging to a supposed “fan” named “Jaco Johan”. Erasmus retweeted a damning video from that account which highlighted a catalog of early test errors made by officials.

In one clip, Bok Cheslin’s winger Kolbe is played in the air and remains lying on the ground. The pillar of the Lions, Mako Vunipola, takes Kolbe, as if to tell him “keep going”. If Kolbe had been seriously injured, it would have been a potentially dangerous action by Vunipola.

“As the director of rugby, the medical service is also part of this role and we have the BokSmart program aimed at player safety,” Erasmus explained.

“I just thought the way Cheslin was picked up from the ground was dangerous, considering he could have been injured.

“We teach our elementary school kids of all ages to leave a player alone if they are injured, and we wouldn’t want our Springbok players to go looking for Lions players this weekend if they were. are lying on their backs injured. . So, I just felt it was important to get out there… ”

New Zealander Ben O’Keeffe will referee the second test at Cape Town Stadium. Gatland is a New Zealander. Erasmus said he would never infer any irregularity about it, and immediately inferred it.

“When Warren spoke last week about Marius Jonker … Warren is a great guy, I can tell you right away, I’ve always liked him and he’s a great man – but that was weird for me that people question the integrity of Marius. ” said Erasmus.

“It was almost like… we say Ben O’Keeffe is a New Zealander and Warren is also a New Zealander… we will never say that. It wouldn’t work well – the integrity of the game would be called into question and we would never do that.

“I felt that when [Marius] was TMO for a South African team, that didn’t suit me. He’s a good friend of mine. I made a point of not talking to him before the match.

“I don’t know if World Rugby should step in, but if Ben O’Keeffe makes the wrong decisions on Saturday you wouldn’t hear us say it’s because he’s New Zealander and Warren Gatland is New Zealander.

“I think you have to try to stay away from these things… I’ve made these mistakes a few times, I’ve talked too much about the referees too many times.”

Erasmus kept a calm tone throughout, speaking without raising his voice, but it was obvious he was restless. He fidgeted and rocked back and forth in his chair. One thing is for sure in rugby: Pre-match verbal fights don’t happen when you are extremely confident.

Gatland was under pressure last week. The Boks had barely practiced due to a team ravaged by Covid and they had played a test in 21 months. A loss for the Lions, under these circumstances, would have been a disaster for rugby.

The fact that they scored just five points against a Boks team playing as poorly as halfway through the game suggests he had reason to be concerned.

The Lions barely won a game they should have won comfortably. DM