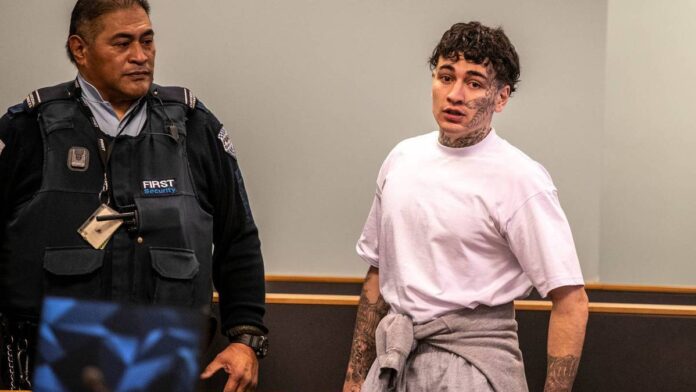 Riki Wiremu Ngamoki’s attorney said the inmate had no reason to believe anyone in the Auckland prison yard would have a rod. Photo / Michael Craig

“How do you react when it looks like someone is being killed right in front of you?” “

The lawyer for an inmate charged with murder asked jurors this question as gruesome footage of a murder in a maximum security prison was replayed in court.

Paul Simon Tuliloa, Riki Wiremu Ngamoki and Lopeti Telefoni have all pleaded not guilty to the murder of inmate Blake John Lee at Auckland Prison in Paremoremo.

A fourth inmate, whose name has been removed, stomped on Lee and stabbed him with a rod in a prison yard on March 5 last year.

And this rod-wielding inmate was on a possibly unstoppable quest to kill, Ngamoki’s defense lawyer Anoushka Bloem told the Auckland High Court today.

Bloem said his client was unable to stop the stabbing, but he also failed to help the murderous inmate.

She told the court that Ngamoki was not aware of any planned attacks on Lee.

And Bloem said his client’s involvement in the violence was limited to a simultaneous but separate attack on Lee Mongrel Mob inmate Cesar Su’a.

She said that although Ngamoki’s assault on Su’a accidentally helped the inmate wielding a rod, it was not enough to convict Ngamoki of murder.

“It wasn’t a group attack. There was no plan. It was spontaneous.”

Bloem said the young men in the yard had virtually nothing to do, perhaps expecting some exercise and playing cards.

Jurors were told that Ngamoki and Tuliloa identified with the killer Beez and that Telefoni was with the Crips.

Paremoremo inmates were locked up 23 hours a day and there was “not even a basketball hoop” in the yard, Bloem said.

Prosecutors argued that Ngamoki fought with Su’a to prevent her from helping Lee.

But Bloem said the fourth inmate was on a ferocious individual mission.

“He showed absolutely no restraint in his frenzied murder of Mr. Lee.”

And jurors heard the inmate with the rod stab Lee 15 more times after Ngamoki withdrew from the fight with Su’a.

Bloem said if prison security worked properly, the fourth inmate would never have been allowed to run a rod through the yard.

She said no one, including Ngamoki, had reason to believe that a deadly weapon such as the rod would have been in the yard.

But she said the Crown had indeed told Ngamoki, “You must have seen him and therefore you must be guilty.

Prosecutor David Johnstone had previously suggested that the presence of Mongrel Mob members agitated Ngamoki for some time before violence erupted.

The three men on trial admitted to having been intentionally injured.

Tuliloa’s attorney, Gary Gotlieb, is expected to deliver his closing speech later, before Judge Simon Moore brings the case to the jury.