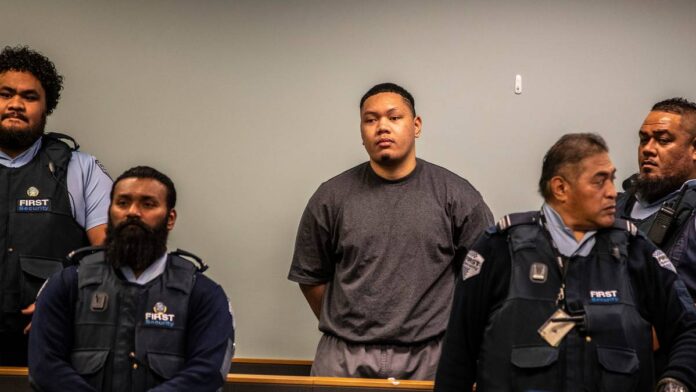 An inmate charged with a frenzied gang-linked murder gave jurors a taste of the barbaric conditions in New Zealand prisons.

Lopeti Telefoni is one of three men who deny the murder of Mongrel Mob prisoner Blake John Lee at Auckland Prison in Paremoremo.

Lee was beaten and then repeatedly stomped and stabbed dozens of times when members of different gangs were gathered in a prison yard.

“I have seen prison fights where people get their heads stomped on like this and no one dies,” Telefoni told the Auckland High Court today.

Riki Wiremu Ngamoki and Paul Simon Tuliloa also pleaded not guilty to the murder of Lee, who was killed on March 5 last year.

A fourth man, whose name has been removed, stomped on Lee’s face at least six times and allegedly pulled out a rod hidden in his bonnet to stab Lee.

Telefoni, 20, said Lee and an inmate helping Lee were members of Mongrel Mob.

In cross-examination today, he said he was unaware of any cases of manslaughter with a punch.

He was asked if he knew that when someone fell on concrete and hit their head, they could die.

He was asked if he saw Lee banging his head on the concrete floor when he hit him in the prison yard.

And he was asked if the idea was to make sure Lee was unconscious the moment he hit the ground.

Each time, the answer was “no”.

“Well, how badly did you want to hit him?” Asked Prosecutor David Johnstone.

“You hit him hard because you were hoping it might minimize the risk to yourself?”

Telefoni said it was okay.

Telefoni, Ngamoki and Tuliloa admitted to injuring Lee with the intention of injuring him.

Paremoremo footage played to jurors showed an attacker leaping into the air several times before landing feet first on Lee.

At one point, a bright red spot appeared on Lee’s torso, but after that Lee was stabbed at least three more times.

The trial before Judge Simon Moore and the jury continues.