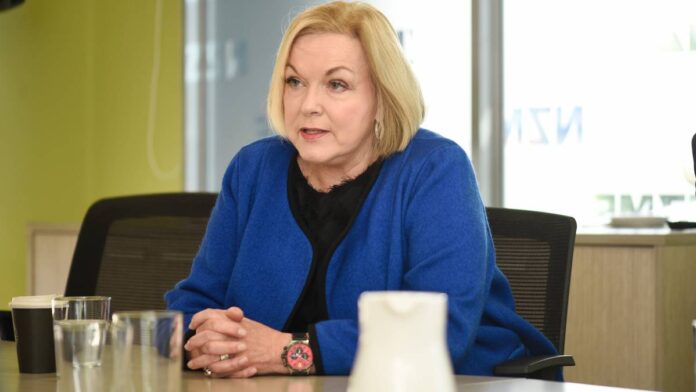 Collins told the Bay of Plenty Times Weekend that, from his perspective, the party was presented with “someone who is entirely different from what he described”, following allegations that he was allegedly masqueraded as her ex-partner online, shared explicit photos, and even claimed to be her cybersex.

Otherwise, Collins said she “should fire him as I had to face Andrew Falloon”.

As a result, she wants to reorganize the party selection process.

“I was very clear and the review that was undertaken for the board was very clear that our selection processes need to be more robust,” said Collins.

Collins was in Tauranga today as part of a visit to the Bay of Plenty electorate, flanked by Bay MP Todd Muller.

Collins said “most of our candidates are brilliant,” but the party needed to go back and talk to people who weren’t necessarily on the benchmark list.

“We have to improve our game on this,” she said.

“And understand that we live in a different world than where people know someone from school and they can talk about it.”

In light of the retirement of National Congressman Nick Smith, which he announced on Monday, Collins has refused to confirm or deny telling Smith an imminent media story about his allegations of workplace bullying, which he said. cited as the reason for his resignation.

“All the discussions I have with my MPs are entirely between us, so I never discuss things like that. If I hear about a story that could affect a MP, I will always let them know. not to do so would, I think, be reprehensible. “

When asked if she thought whoever told her about the looming media story might have unnecessarily pushed her into retirement, Collins replied, “I would have thought not.”

“I think the investigation itself is something that is difficult for anyone to have to do with it.

Collins said Smith had indicated that he was upset after losing Nelson’s electorate seat after 30 years and that he was considering leaving during the term.

“I think you come on stage after 30 years [and] 11 elections – you sit there and say “am I enjoying this that much?” And the answer is probably no.

“I don’t think people realize the kind of hours and commitment it takes to be an effective MP. And Nick is 30 years old.”

The veteran MP said he would leave Parliament on June 10 and revealed that the Parliamentary Service was investigating “a verbal altercation in my Wellington office last July which was unsuccessful”.

It is understood that the altercation took place with a young staff member who had been working there for less than a year prior to the incident.

The verbal altercation – described by the New Zealand Herald as “angry words from both sides” – was recorded by a third party, who worked for the party in a nearby office, and then filed a complaint with the parliamentary services.

Collins said the recording was “a violation of the law”, and that the person responsible no longer worked for the parliamentary service and had “indeed gone elsewhere”.

“It’s pretty clear from what I can see from the law that it is illegal to record a conversation that you are not a party to or for which you do not have consent to do so.”

She said it was difficult to comment because she did not know the full basis for the investigation.

“I did not see the investigation, I was not informed by the parliamentary service.”

Collins said it was “entirely up to him” if Smith wanted to return to work before he retired.