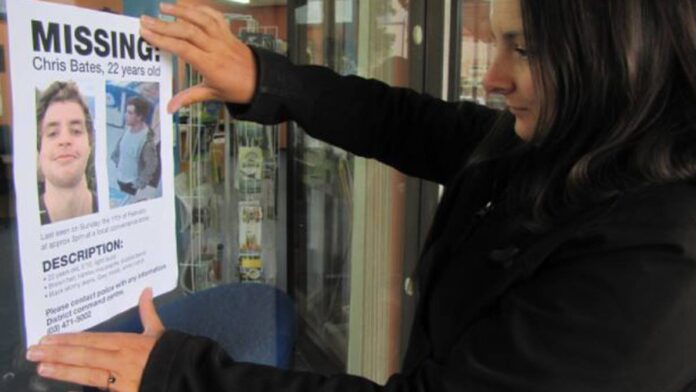 Christopher Bates’ parents want someone to remember something that brings them to their son. There has been no sign of the Alexandra man since his disappearance almost three and a half years ago, and his case has been referred to the coroner.

Likewise, the investigating officer, who retired on Wednesday.

Yet a body is what they need to end the wait.

Referring Chris’ case to the coroner is something his parents and Detective Sergeant Derek Shaw of the Central Otago Criminal Investigation Branch describe as “procedural.”

Chris’ parents are no longer together but are united in making this decision, even if it offers them nothing in terms of answers.

“It doesn’t change anything,” John said.

“What we do know is that Chris left the family home on Sunday February 11 and we never saw him again.

“The intervening period was painful as we all moved on with our lives and struggled to come to terms with the likelihood that Chris’s life would not continue.”

“It’s got to the point where we have to move on for a coroner to take it into account,” Shaw said.

Chris has missed birthdays, Christmases and his brother Jonathan’s wedding in the meantime.

For Trish, John and Shaw, the coroner is just the next step in a mystery that remains just that – a mystery.

Chris left the family home in Alexandra on February 11, 2018, 10 days after his 22nd birthday, and never returned.

His disappearance was reported to the police four days later, triggering an ongoing investigation.

“We don’t know what his plans were. He left to catch up with friends or go swimming… he bought some cigarettes,” Shaw said.

These cigarettes represented the last proven sighting of him, when he was captured on CCTV footage after purchasing a packet of John Player Special at the Z gas station in Tarbert St, several blocks south of his home at 3:51 p.m.

This brand of cigarette would trigger a potential lead in the case later – more on that later.

“He was identified with certainty and was traveling on foot alone,” Shaw said.

Chris walked in and out of the then busy – it has since become self-service – gas station at Fox St.

“It’s largely a mystery after that.”

What has been established is that Chris returned home at one point and left his wallet, containing the bank card he used to buy the cigarettes, in his room.

No one was home at the time to see when he was coming and going.

Chris had his phone with him, but it was damaged, unreliable, and had little battery life.

He used to turn it off to save power.

Shaw says that after positively identifying Chris in the CCTV footage, investigators’ efforts turned to finding his phone.

A corner of land has been identified to the north and east of the city where his phone was detected from 6.30 p.m.

The last signal from the phone, and by virtue of Chris’s last documented movement, was at 10:50 am the next day.

John says don’t read too much about it.

“He [the phone] was still cutting. He couldn’t call his friends because his phone wasn’t working. “

Initial searches focused on the area triangulated from a cell phone tower, with much of the open terrain being excluded.

Efforts over the following weeks and months involved search and rescue teams from Otago, Southland and Canterbury, and focused on part of the area, with dense vegetation and swamps near of the Manuherikia river.

As Shaw relates, the Clutha River from Alexandra to Roxburgh Dam and other possible viewing locations across the country have been verified, but search efforts have kept returning to the same location.

Two floods swept through this area between the initial search and subsequent search.

There has been some interest in finding packets of John Player Special cigarettes across the Manuherikia River on the lower slopes of the Knobby Range and above the Otago Central Rail Trail, Shaw says.

“We had these tested at the same kind of forensic level you would apply to a homicide case.

“Male DNA was detected but it was not a conclusive match with Trish.”

For Chris’ family, it was the research efforts that sustained them early on.

These efforts would be supported by fellow Chris of Dunedin, John said.

Shaw says research efforts continued in earnest until April, when drainage plans for the Manorburn Dam were deemed unworkable.

“Losing a child is different, losing someone young … you are losing their future.”

Tears in John’s eyes as he gives his opinion.

“Losing a son is about as bad as it gets.”

Chris’ future seemed secure; he had obtained a Bachelor of Commerce degree from the University of Otago and was applying for jobs when he passed away.

Once again, they repeat that the coroner is just a formality.

“It doesn’t end until we finally find that clue that allows us to put Chris down.”

Trish says the past three and a half years have been a roller coaster ride.

“Lots of people have helped find Chris and find answers to end the family.”

They need to find Chris to have the opportunity to do the one thing they haven’t been able to do right so far: grieve.

For Shaw, there is also an element of emotion.

The 42-year-old police veteran ended his career on Wednesday – Chris’ case was his last open case, and he is staying with him.

• Christopher Bates’ case remains open; anyone with substantial information should contact the police on 105 and cite file number 180215/9929.