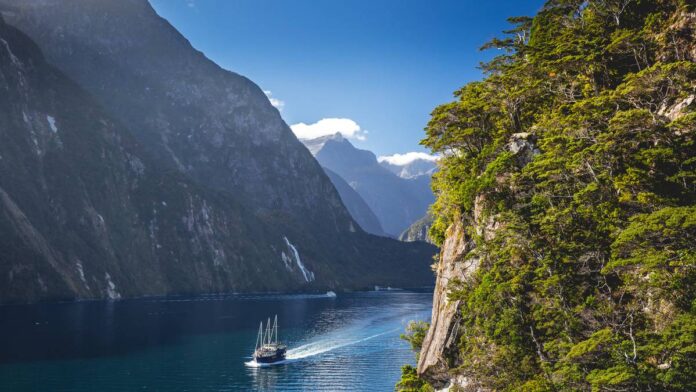 Milford Sound is set to change, with the possibility of a ban on fixed-wing aircraft, with foreign visitors having to pay to enter the area and a ban on cruise ships in the strait. Photo / Supplied

Milford Sound is set to change, with the possibility of a ban on fixed-wing aircraft, with foreign visitors having to pay to enter the area and a ban on cruise ships in the strait.

The government has confirmed that the work of a panel of experts on the future of Milford Sound will take its next step.

Tourism Minister Stuart Nash has said tourism in Milford Sound Piopiotahi cannot return to its pre-Covid state. The significant pressure exerted by the 870,000 visitors in 2019 had undermined cultural and environmental values ​​and infrastructures. As a tourist experience, it was crowded, rushed, noisy and dangerous, he said.

“The project is an excellent test for a self-funded, visitor-paid, sustainable tourism system, with costs and negative impacts built into the tourism experience rather than borne by New Zealand taxpayers and taxpayers,” said Nash.

Transport Minister Michael Wood was excited about the project.

“There is great potential for a world-class zero-carbon transport and tourism experience, supported by an efficient and sustainable electric or hydrogen transport model.

“The Milford Opportunities Project group proposes that New Zealanders can still travel to Milford Sound Piopiotahi for free, and to help preserve the landscape, this will be managed with a permit system.

“The master plan aligns with other strategic goals for transport, such as reducing emissions, increasing the use of public transport and improving safety and resilience,” said Wood. .

“As Covid has backed down the numbers, we expect them to come back as this is a rare opportunity to visit true wilderness,” Dr Turner said.

A recommendation to distribute numbers more evenly through an incentive parking and permit system, with international tourists paying a fee for their permit, would provide funding for many other elements of the master plan, he said.

Other recommendations include a combined visitor center and park in Te Anau and another in Milford Sound Piopiotahi, as well as a new hotel and staff accommodation; create more opportunities for visitors to nearby Te Anau (including cycle paths and walking trails), in collaboration with the Fiordland Community Council; improved walking and some cycle paths in the hallway; better walking and audio viewing possibilities, as well as improved layout on the very limited flat area of ​​Milford.

The master plan also recommends that the Milford Sound airstrip be closed and that cruise ships not be allowed to enter the strait.

“We know it will be controversial and we will affect people’s livelihoods,” he said.

“But the airstrip is in poor condition, is already starting to flood at extremely high tides, is very exposed to the risk of an Alpine fault tsunami and would be very expensive to rebuild to a modern and sustainable standard. transported only about 3% of visitors in 2019.

“And the visual impact and risk of cruise ships conflicts with the majority of land visitors, and they have other equally spectacular Fiordland options to visit.”

Dr Turner said it was important to note that the blueprint made recommendations to the government and that detailed business plans on how the recommendations would become reality had to be created.

“We were asked to come up with something innovative, something stimulating, something that will change the way tourism interacts with the environment and conservation. I think we did and now the hard work of implementation and decision making on how to implement it begins, ”he said.