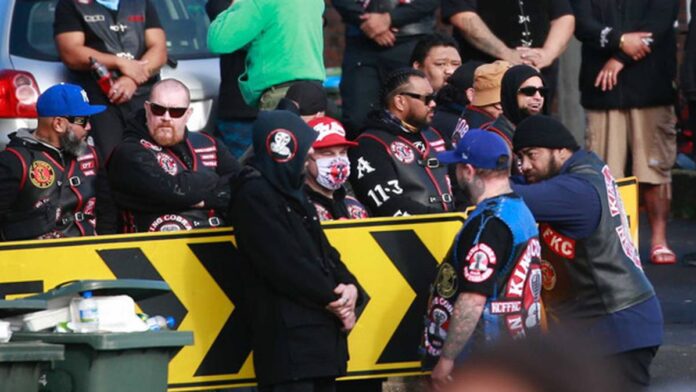 A funeral procession involving large numbers of motorcycle gang members is expected to pass through a number of Auckland suburbs today.

Taranaki Fuimaono’s friends and family gather this morning to bid farewell to the 43-year-old, who has ties to the headhunter gang.

DO YOU KNOW MORE? SEND US AN EMAIL

Over 300 mourners are at the funeral held at St Joseph’s Catholic Church in Gray Lynn.

Some have been seen dressed in white, while a large number of gang members are dressed in black and their respective gang crests.

A number of men adorned with King Cobra badges are also present. It is understood that Fuimaono is a former member of the KC.

Known as “Ardie” or “Ardz”, he was named this week as the man who died shortly after being taken into custody on Saturday night.

Police told the Herald that events related to Fuimaono’s funeral were unfolding across town throughout the day – from Pt Chevalier to Gray Lynn and parts of South Auckland.

A family service for Fuimaono was held at the same church last night.

A service sheet showed photos of him as a young boy, young man, and later as a father with young children.

His coffin features the Samoan flag painted on the side.

Fuimaono, from Westmere, was arrested on Saturday evening and later died in Auckland City Hospital.

Police said she was supporting her family and a critical investigation was underway to establish the circumstances of her death.

The case was also reported to the Independent Police Conduct Authority.

WorkSafe NZ and the coroner have also been notified of the death.