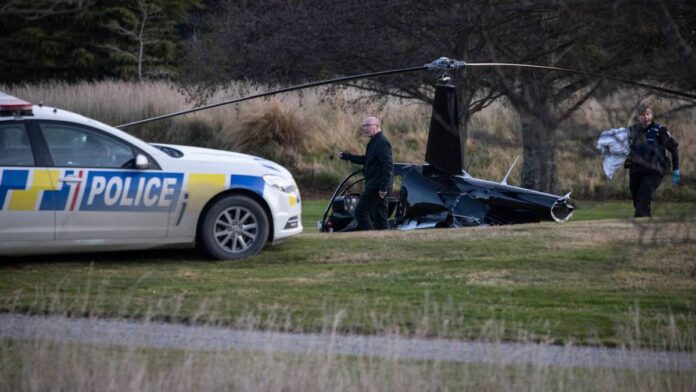 The pilot of a helicopter that crashed into a golf course, injuring a newly married couple and a wedding photographer, has had multiple surgeries and is scheduled to undergo further procedures today.

The wedding day tragedy unfolded on Saturday on a fairway at the Terrace Downs Resort golf course in Windwhistle, 80km west of Christchurch, when the Robinson 44 descended as it took the bride and groom to a scenic mountain spot for post-nuptial photos.

The four people on board – the bride, groom, wedding photographer and pilot – were seriously injured and rushed to Christchurch hospital after the 3:05 p.m. crash.

The couple were named by friends Fay El Hanafy and Mahdi Zougub, who have close ties to Al Noor Mosque in Christchurch and who postponed their wedding plans after losing friends in the terrorist attacks on March 15, 2019.

El Hanafy underwent surgery yesterday after suffering a broken back, foot and legs. Zougoub has a broken back and is due to undergo surgery today.

The photographer on board has been identified as award-winning Rachel Jordan, who suffered spine fractures and also underwent surgery. She also has five fractured ribs, a lung laceration, a fractured breastbone, a broken arm in a few places, and fractured feet.

An investigation is underway into the cause of the accident.

Wyndon Aviation, owner of the helicopter, said that although the injuries are serious, they are “grateful that all four are recovering in hospital.”

A company spokesperson said the pilot had undergone a number of medical procedures in the past 48 hours and was due to undergo further surgery today.

“Their condition can be described as improving, albeit slowly,” the spokesperson told the Herald today.

Yesterday, the company said it was “not aware of any causal factors regarding this accident” and that it would be “not only counterproductive but inappropriate to speculate on the cause”.

“However, we are committed to working closely with CAA [Civil Aviation Authority] and authorities investigating the circumstances of yesterday’s accident. “

The Civil Aviation Authority yesterday sent a team from its investigation and intervention unit to the accident site to begin “a thorough examination of the scene” and collect witness statements.

“The initial objective of our investigation will be to better understand the circumstances surrounding the accident,” the CAA said.

“This will help us identify if there are any safety issues that need to be addressed quickly by CAA and helicopter operators.”

The helicopter was removed from the site yesterday afternoon.

Waleed Abaza, a close friend of Zougub who was not in Al Noor on March 15, 2019 but lost close friends in the mosque shooting, was one of the “traumatized” wedding guests.

He recounted how he and his friends drove to Terrace Downs and were excited to witness the big day, when they saw an ambulance and wondered what had happened.

They then met other shocked guests who told them there had been a helicopter crash involving the wedding party.

At first, they thought people had lost their lives in the crash that happened just after takeoff.

“We were told it had just taken off and had just fallen from the sky.”

About 10 minutes later, they learned that all of them had survived but had been seriously injured.

“Everyone was in shock – we were all on our feet, no one knew what to do,” Abaza told the Herald.

“We were all trying to find information.

He cannot believe that tragedy struck just two years after experiencing the attacks on the Christchurch Mosque.

“We both lost many friends in the March 15 attacks,” Abaza said.

“It was supposed to be such a happy day, that’s the irony.

“[Zougub] has been through a lot in his life and we were so happy for him. “

Many of Zougub’s friends killed in the terrorist attacks are said to have attended Saturday’s wedding and supported their close friend.

“It’s so hard to believe this happened,” Abaza said. Now he wants answers and someone to be held responsible for the accident.

“It should never have happened.”

Ronnie Ronalde, COO of CPG Hotels, which owns the resort, said they had contacted the family of the newlywed couple.

He says they would like to pay for a return visit when they are healthy again.