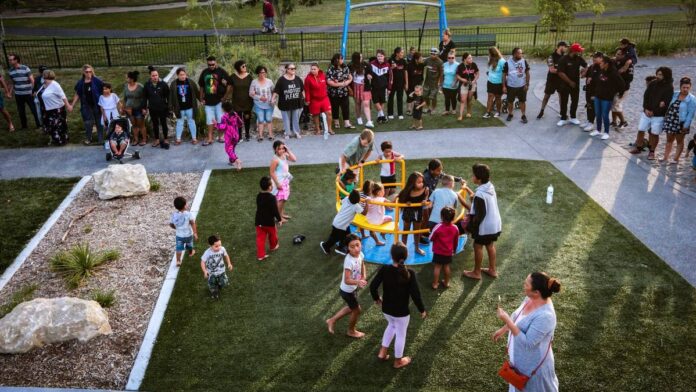 The Flaxmere community gathered on February 12, 2020, for a karakia for the 4-year-old boy. Photo / Paul Taylor

Hawke’s Bay Police have charged two people 16 months after the serious assault of a 4-year-old boy in Flaxmere.

The boy was found seriously injured in a rental property in Flaxmere on January 29, 2020.

He made a remarkable recovery, but suffered permanent brain damage.

On Wednesday, a 32-year-old woman was charged with bodily harm with intent to cause grievous bodily harm, neglect and nine counts of assaulting a child.

A 27-year-old man is also charged with negligence and willful injury.

Both will appear in Hastings District Court on Tuesday, June 8.

Hundreds of people gathered in Flaxmere Park immediately after for a karakia for the boy.

Lynsey Abbott, who helped organize the community karakia, welcomed the news of the arrests.

“I’m so over the moon… I’m so happy I’m crying a lot here right now.

“This little boy has to live with the consequences.

“I really, really hope that for the community at large, this recognizes that this is something that just hasn’t been put under the rug yet.”

Abbott acknowledged police for their work on the allegations and “for sticking to it and making sure it doesn’t just go away.”

Hastings District Councilor for Flaxmere Henare O’Keefe said it was good to hear that the people who had been “under the radar” had been “flushed out now and that’s a good thing”.

Feelings of anger and frustration had crept into the community and they will now have “a place to go”.

He said after the incident the community of Flaxmere “took him personally”.

“There was a lot of absolute and utter sympathy and empathy for the boy… then anger, all of that suspicion.”

Over the next 12 months the community came together and, O’Keefe said, Flaxmere’s crime rate is now the lowest in Hawke’s Bay and he felt that meant “we didn’t waste this wrong”.

“He is supported by a variety of health and education professionals who will continue to work with him to meet his care and education needs,” said Palmer.

“Her significant progress is a testament to the care and aroha her caregivers have given her.”

Detective Sergeant Heath Jones said if anyone has further information on the incident, call police on 105 or Crimestoppers anonymously on 0800 555 111 and quote case number 200130/8360.