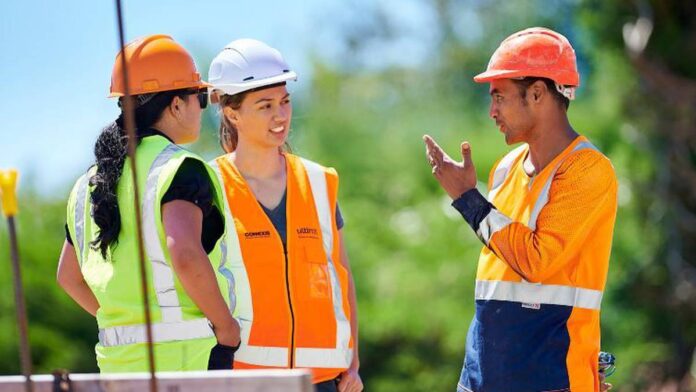 New Zealand’s infrastructure industry is booming, but a shortage of around 44,000 skilled workers over the next five years could bring it to a screeching halt.

Roads need to be replaced, leaky water pipes need to be improved, power lines need to be maintained, and faster broadband technology needs to be installed – and leaders in infrastructure training believe girls are the ones who move New Zealand forward.

Kaarin Gaukrodger, managing director of the infrastructure industry training organization (ITO) Connexis, said the future of infrastructure could be female.

“Women make up 50% of New Zealand’s population, so if businesses don’t make the most of this skill base, they are missing out. “

This month, Connexis is trying to attract women to the infrastructure industry through its annual Girls with Hi-Vis® (GWHV) campaign.

For the rest of June, Girls With Hi-Vis will give high school girls across the country the opportunity to visit an infrastructure company through their school, gain hands-on experience and hear from inspiring women in the industry.

There are also daily activities such as moving a bucket of water with an excavator, climbing a power line pole in a practice yard, setting up a water meter, and handling traffic in virtual reality.

She said the companies involved saw a real benefit in attracting women.

“Since there are more women on board, we have seen positive changes in the industry.”

This included developing safer ways to use heavy equipment to accommodate the differences in physique between men and women.

“It has been beneficial for both men and women because the new way of doing things has reduced fatigue and is often safer.”

The companies represented at Girls With Hi-Vis had a real interest in increasing the number of women hired, Gaukrodger said.

“They do it because they really see the benefits of having more women working with them.

“It’s not for the feel-good factor.”

More than 20 workplace open days will be organized across the country in June, from Auckland in the north to Twizel in the south.

Information is available here or in high schools.

“START FROM THE BOTTOM”

Standing by a rural road in the summer heat stopping traffic with a stop / go sign and no toilet in sight may not seem like the most attractive job in the world.

But for Katareina Kaiwai, it was the first step on the road to success.

The Ruatoria woman, passionate about roads and infrastructure, gave up a three-year stint in Fulton Hogan’s office to pursue a career in the field of roads and the heavy machinery that goes into them.

Today, the former lollipop worker employs over 20 people through her company Tairāwhiti Contractors and is passionate about bringing more women into the male-dominated industry.

More than a quarter of Tairāwhiti Contractors’ staff is made up of women – and Kaiwai wants to increase that number even further.

Women bring unique skills and advantages to the industry, says Kaiwai, and she firmly believes that they are not only as capable as men, but also offer a new perspective and increased efficiency.

“Women are great planners and often think a few steps forward, which is a huge advantage and a great skill in this industry.

“Planning is part of what we do and the women I work with often juggle family life, so they’re good at figuring out the best and most efficient way to get the job done. “

Kaiwai, mother of a 7-year-old daughter, started in infrastructure 12 years ago at Fulton Hogan’s office.

“I learned about the road, culverts and traffic management in the office, systems, finances, everything and then decided I wanted to be on the road.

“They said yes you can do it but you have to start from the bottom – on the lollipop – so I did it.”

Kaiwai rose through the ranks and completed his apprenticeship in civilian infrastructure late last year.

She juggled having a baby, studying, working and qualifying.

As one of the few female civil construction business owners in the East Coast region, Kaiwai is a champion of women, her industry and her region.

According to Kaiwai, more women are joining the industry, with the number of women training at Connexis rising from 3% in 2010 to over 10% this year.

“I want to see more women in the industry and we can do that by changing mindsets and making the work environment more attractive to women.”

Kaiwai has made her own business as inclusive as it can get, from vintage products in the glove boxes of trucks to providing a safe workplace so a new road worker can bring her baby to the office.

This month, Kaiwai will encourage more young women to enter infrastructure through the national Girls With Hi-Vis event.

She hopes the workshops and conferences will inspire a new group of women across schools to roads and infrastructure.

“I used to only see one road, but now I see all the many components of it,” she said.

“You can go anywhere.”