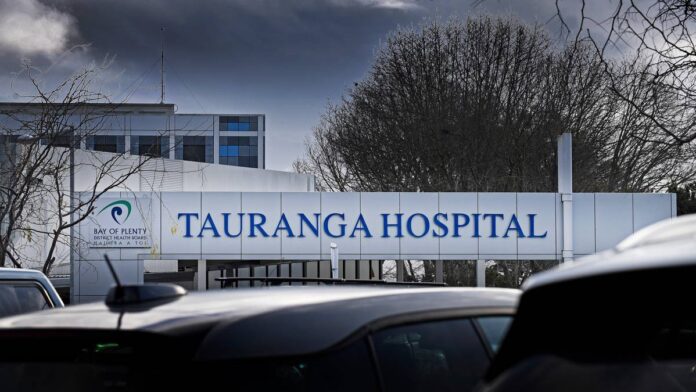 Police were called to Tauranga hospital today after an incident which MP Simon Bridges describes as a gang fight. Photo / George Novak

“Patched up” gang members took the entrance to Tauranga hospital today and were implicated in someone being “badly beaten” in the nearby parking lot, according to national deputy Simon Bridges.

Bridges took to social media with an experience he said he witnessed after going to visit his elderly father in the hospital this afternoon.,

In a Twitter post, he wrote: “Patched gang members had invaded the driveway and someone was beaten up in the parking lot during a gang brawl.”

In another post, he wrote: “I say this because so many people want to minimize this violence and this gang violence. There have always been gangs but nothing like what we see today.

A police spokesperson said they were called over a “mess report” in the parking lot of Tauranga hospital at 3.15pm.

Police said it followed an incident in which “a motorist was involved in some sort of altercation with a couple in the parking lot.”

“A police unit surrendered, spoke to the parties involved and said there was no problem.”

I was at Tauranga hospital this afternoon to visit my elderly father. Patched gang members had taken over the entrance and someone was beaten up in the parking lot during a gang brawl. Just another day in the Bay of Plenty Jacinda Ardern, Poto Williams and Andrew Coster.

The police spokesperson initially said there was nothing in their file to suggest it was a gang fight.

It also appears that there were no arrests.

They later said staff reviewed CCTV footage of the incident in the parking lot and “confirmed there were no gang members.”

The NZME reported last month that there are now more gang members in the Bay of Plenty than anywhere else in New Zealand, according to police figures.

Bridges said at the time that the numbers pointed to a “crisis” that was not under control, while a man who works directly with gang members said public perception needs to change.

“What’s depressing for our region and Tauranga is that we have the most gang members in New Zealand,” said Bridges.

“It’s a crisis… what worries me a lot is that we are becoming numb to it and it is normalizing.”

Bridges did not blame police for the increase, citing a lack of resources to stem the growth.

“We have to be very careful in stating them as facts as they are likely to be very inaccurate. It is very easy to get along [the list] and very difficult to get off, ”he said.

“That’s not to say there hasn’t been growth on the scene because there is, but these exact numbers make it seem like we’re more certain of the percentage of growth than we actually are. . “