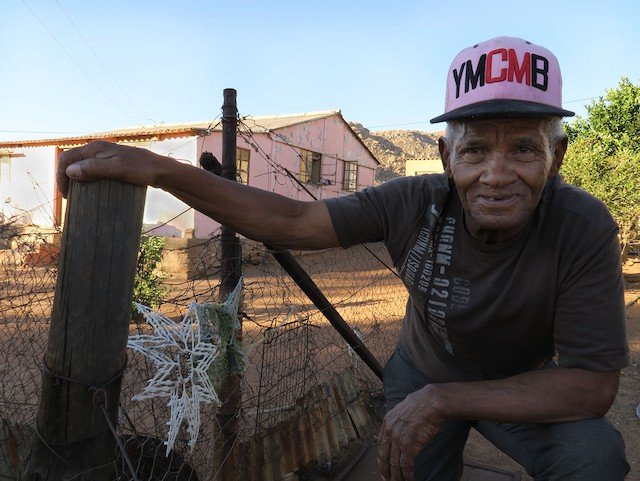 Johannes Meyer lives a stone’s throw from a stream polluted by effluents from the Nababeep wastewater treatment plant. He says the stream has been heavily polluted with sewage for at least a decade. (Photo: Steve Kretzmann)

A permanent stream crosses the Nababeep Desert north towards the Orange River. It is a river of pure sewage that remains as black water for at least three kilometers. Its source: the town’s wastewater treatment plant managed by the municipality of Nama Khoi.

With little to dilute it (the region receives 167mm of rain per year), the stream remains visibly polluted and continues to stink for at least 3.5 km downstream of the sewers before the valley turns west to eventually join the Skaaprivier.

Johannes Meyer, who has lived nearby since 1985, said that although this has always been a channel for sewage treatment plant effluent, the water looked clean, which would always be the case if the sewage was properly processed. It has been in its current state since he retired from his job at a nearby copper mine in 2010. Yet the municipality has spent R11.5 million on sanitation infrastructure in Nababeep over the past year. 2019/20 fiscal year.

According to the Integrated Regulatory System Dashboard of the National Water and Sanitation Department, the final effluent analysis Nababeep’s wastewater treatment works on April 6 failed to meet minimum standards. The factory obtained 0% for microbiological and operational compliance.

In an attempt to locate City Councilor Gillian Peters (ANC), a city worker who had just finished fixing a water leak, said: “If you find it, take a picture so we can see what it looks like.

Peters was not at the municipal offices in Nababeep and did not answer the cell phone number provided by officials.

Sanitation failure is not limited to Nababeep. According to the scoreboard, with the exception of the town of Steinkopf, the eight wastewater treatment plants operated by the municipality of Nama Khoi have consistently and significantly failed to meet minimum standards in 2020 and continue to do so.

Springbok is the seat of the municipality of Nama Khoi. In his defense, the illegal dumping of everything from household garbage to builders’ rubble lines the gravel road leading to the landfill, which is made up of terraces against one of the rocky hills. There was no surveillance when GroundUp visited and smoke was rising from the site.

Rachel Malubila was on her way to the landfill with her stepdaughter and two granddaughters. Malubila, carrying a bag of salvaged magazines and papers, said they were looking for reading material as the city library had been closed since the first Covid-19 lockdown in April 2020. (A visit to the library l ‘ confirmed.)

She said on days that municipal garbage trucks came to the site after picking up trash in town, children would collect thrown away food.

Springbok’s roads are potholed or worn out with gravel, but the municipality is spending more than R10 million in a municipal infrastructure grant to pave Phillip Soudens Street in Bergsig, Springbok Township planned by apartheid.

The mayor of the deeply dysfunctional Nama Khoi municipality is Riaan Cloete of the ANC. The ANC has a plurality of seats (but less than 50%), followed by the DA, the EFF and the Khoisan Revolution.

The municipality has been subject to a qualified audit by the Auditor General (AG) every year since 2016.

The AG said “reasonable measures” to prevent irregular spending “have not been taken” and the report is damning about the municipality’s failure to comply with the Municipal Financial Management Act and municipal regulations. the supply chain, often a red flag for corrupt activities. This non-compliance was the main cause of R205 million in irregular spending. It may have been more than that, as the full extent could not be determined.

The AG found that the municipality had failed to take reasonable steps to prevent R11.9 million in unnecessary and unnecessary spending, most of which was due to suppliers not paying within 30 days.

The AG was unable to verify the 333.4 million rand the municipality said it received from “business debts”, such as the supply of electricity and water. There was no adequate system for accurate invoicing and not even sufficient evidence to prove that his invoice for basic salaries and allowances was correct. There were many other qualifiers.

The AG said the municipality depends on government grants and subsidies to provide the services for which it is responsible, and “significant uncertainty exists which may cast significant doubt on the municipality’s ability to continue to operate.”

Attempts to elicit comments from the municipality on these and other issues have gone unanswered.

THE G Consolidated general report on the results of the audit of local authorities of fiscal year 2018/19, notes that the municipality of Nama Khoi was “marred by political instability during 2018/19 due to the inability of the two parties of the coalition governing the municipality to work together”. This has led to the ineffectiveness of the municipal public accounts committee, which is responsible for overseeing the accounts and managing the consequences.

The report goes on to say that committee members have received training, but “these people find it difficult to apply their knowledge in practice” and irregular expenditure investigations – as required by the Municipal Financial Administration Act. – have not been carried out.

Back in 2011, the ANC accuses the DA / Cope coalition of corruption regarding the R18 million missing from housing projects in fiscal year 2011/12. A forensic report at the request of the provincial government implicated a former city manager, Aubrey Baartman. MEC Alvin Botes cooperative governance said criminal charges would be laid against the officials involved.

Baartman’s political movements reflect the political fluctuations in the municipality over the past decade. Baartman left the ANC for the DA / Cope coalition after the 2011 local elections, then joined the EFF before the 2016 local elections. Baartman is now in the provincial legislature for the EFF.

Cope entered with 16% in 2011. The ID merged with the DA, giving it a fragile hold on the board with a coalition.

If the ANC’s losses and the DA’s slow gains continue, this election could see power shift to the DA. However, if Good is in the running, and given the switch of voters in 2006 to De Lille, it could be the Achilles heel of the DA. DM