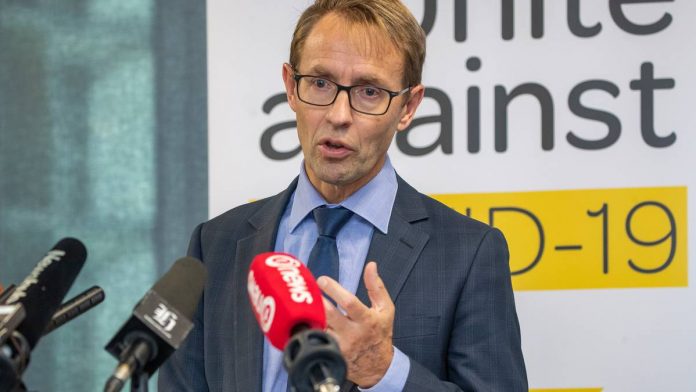 Director General of Health Dr Ashley Bloomfield during his update on Covid-19 with Brigadier Jim Bliss, head of MIQ, at the Ministry of Health in Wellington. Photo / Mark Mitchell

There are no new community cases of Covid-19 and only one case in managed isolation, according to the Department of Health.

The new case is a contact of a previously reported case that is in quarantine; this means that the seven-day moving average of new cases detected at the border is four.

Health officials will also post more information on the tests and possibly a vaccine update.

Yesterday Bloomfield revealed that the government budget for vaccines is $ 1 billion.

He also said people will be able to go to a clinic and receive the Pfizer vaccine from July, when the government plans to be able to roll out an average of 280,000 doses per week for six months.

This would, he said, allow the health ministry to meet its goal of vaccinating all eligible kiwis who wish to be vaccinated.

Efforts will be made – including through mobile stations – to ensure that people in rural and hard-to-reach areas have as much chance of getting a hit as anyone else.

So far, 135,585 total doses of Pfizer vaccine have been administered in New Zealand.

New research from Horizon Research shows that 69% of those surveyed said they would be likely to take the vaccine.

But one in five said they were unlikely to get the vaccine if offered, and 9.4 percent say they “definitely won’t.”

It comes as the government comes under increasing pressure on its MIQ testing regime.

A security guard – whose company was hired by the government to work at the Grand Millennium MIQ facility tested positive for Covid last week.

It was later revealed that he had not yet received the vaccine.

Moreover, he had not received a Covid-19 test since November last year – National leader Judith Collins said it was “unfathomable”.

But First Security – the company the guard worked for – said the government’s test log did not raise any red flags until March 26.

This has led to questions about the efficiency of the system.

Although he called it a “good tool,” he doubled down on the fact that the ultimate responsibility rests with the employers of frontline staff in the private sector.

“I wouldn’t say the supervision of the tests failed.”

He said Case B – the security guard – had been sent “at least four text messages” telling him to get tested.