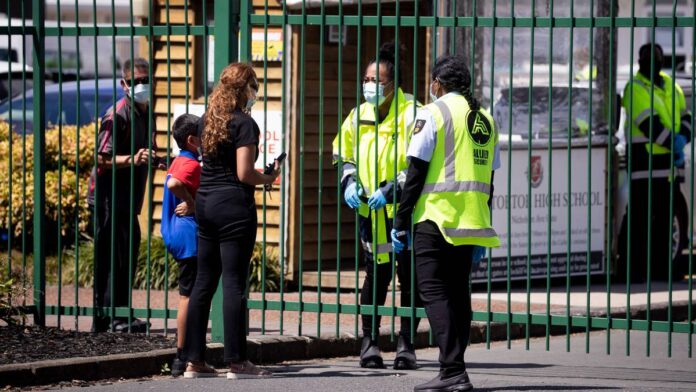 Students and staff at Papatoetoe High School had to be tested in February after a Covid cluster erupted. Photo / Dean Purcell

Influencers were deployed during the Auckland lockdown in March as the government worried about irascible social media users undermining the pandemic response.

Recently released Cabinet documents also show that the lockdown put more pressure on some schools than expected, as teachers and staff suffered from ‘alert fatigue’.

Cabinet documents show that it wasn’t conspiracy theorists who worried the government the most after the Papatoetoe cluster erupted in February.

Instead, it was believed that too harsh criticism condemning those infected for not self-isolating could really jeopardize the country’s response.

An infected 20-year-old man from South Auckland who visited the GP on February 26 for a Covid test, then to a gym later in the afternoon, generated a wave of furious criticism .

The Cabinet document said “social license” was crucial for a strong response to Covid-19.

“The public reaction to particular individuals who have not used the Covid-19 Tracer app or who have not otherwise followed best practices suggests a possible erosion of this.”

Such hostility could undermine the overall response to the pandemic, wrote Covid-19 Response Minister Chris Hipkins.

A March document showed the government enlisted the help of social media figures known to have reach in Maori, Pacific, Indian and youth communities.

Some hosts from Tarana, Flava, The Edge and Hauraki radio stations used the campaign hashtag #stayinforit.

The hashtag’s broadcasters included radio personalities Athena Angelou, reclining in a chair, and Clint Randell’s family of four pizza eaters – plus their dog.

Unite Against Covid-19 has also targeted advertising at younger people than before, up to age 15, and added the Spotify audio streaming service to its channels.

“Some parents work from home and send their children to school because it is difficult for them to manage at home.

“This puts pressure on schools to manage more children on site at Alert Level 3 than in previous events.”

Papatoetoe High School was at the center of the cluster and attempts to suppress the epidemic.

The school has set up testing stations and principal Vaughan Couillault said he knew three of the families infected during the outbreak.

Three months later, Couillault said he had been too busy during the outbreak to closely follow social media, but he recalled some negativity launched against the Papatoetoe families.

“Many of those opinions lacked large amounts of real information,” he said.

Couillault said he knew some teachers and children in Auckland had struggled during the closures.

He said teachers, like members of other professions, wanted to be the best they could be.

Home lockdown for many meant having to simultaneously juggle desires to be the best spouse, parent and professional, Couillault said.

“Local students are realizing that education is a bit of a contact sport and is best done face to face.”

He said some children do well when schooling is done remotely, but many prefer to be in the classroom.

IT’S TIME TO TRACK OUR STEPS

Instead of constantly urging people to use the Covid Tracer app everywhere, it should be mandatory only in high-risk places, said Professor Michael Baker, epidemiologist.

Cabinet documents described poor use of the tracing app, prompting warnings that casual contacts would be difficult to get tested.

But Baker said nightclubs, indoor concert halls and places where people gather and often drink alcohol are practical choices for the mandatory sweep.

The government had considered mandatory testing, but Hipkins told Cabinet there were “fairness, confidentiality, enforcement and enforcement” issues.

He said the Herald mandating the use of the tracker app in selected locations would also accustom people to using the app in high-risk locations.

Visitors to music and entertainment venues often kept digital tickets on their phones now, so mandatory tracker logins wouldn’t add much of a hassle, Baker said.

Evidence showed that Covid-19 was spread overwhelmingly through airborne transmission and respiratory droplets, he said.

Baker said New Zealand also needed a smarter approach to mask warrants and the public needed unequivocal advice on where to use masks.

He said that in Australia two new “double mutant” variants of B.1.617, dubbed Delta and Kappa, were present and have recently wreaked havoc in India.

Baker said it was far too early to be complacent, especially since only around 5% of Kiwis had received their second dose of the vaccine.

“We know what we have to face. And to move forward we have to go through the next six months or so. Now is the time to upgrade our systems.”