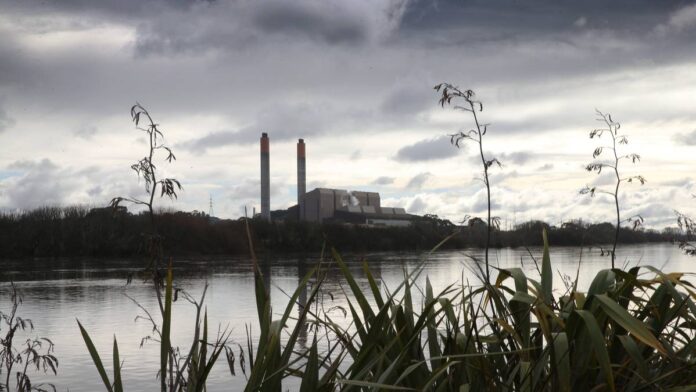 Coal used for power generation in New Zealand more than doubled in the January-March 2021 quarter, making it the highest quarter since 2012. Above, the Huntly Power Plant. Photo / Doug Sherring

New Zealand burned more coal for power generation in the first quarter of this year than any other quarter in nearly a decade.

The revelation comes in the wake of a “transformational” report on climate change which condemns successive governments to inaction to reduce greenhouse gas emissions which continue to rise.

The latest New Zealand Energy Quarterly for January-March 2021, released today, showed the amount of coal burned for power generation more than doubled from the previous quarter to almost 430,000 tonnes.

This is the strongest combustion in a quarter since 2012 and has helped bring the overall share of renewables down to 79%, three percentage points lower than at the same time last year.

MBIE’s Director of Markets, Evidence and Ideas, Daniel Griffiths, said the driver for this change was low storage levels in hydroelectric lakes and less wind.

With below-normal precipitation, hydropower production declined 9% due to lower hydropower storage levels and generators bracing for a drier-than-usual winter.

This factor, coupled with a tight gas supply that has declined by 18% over the past year, has resulted in increased imports of coal to meet the demand for power generation.

“Coal production was used to fill the gap from other sources with a third Rankine unit at Huntly commissioned during the period, which contributed to a near doubling of coal production for the quarter. compared to the same period a year earlier. “Griffith said.

“The share of electricity produced by coal has increased to just over 10%.

“Nationally, electricity demand fell 3% from the same quarter in 2020 with a sharp drop in demand from the pulp, paper and printing industry.

“In the real world, lake levels are low, gas production is declining, the sun doesn’t shine at night, we depend on coal, and electricity prices are rising.

“Right now, the Kiwi industry is facing shutdown due to high electricity prices. When contracts are renewed, those prices will filter into the retail market, and people will see how hot air from the Climate Change Commission is really expensive. “

The Climate Change Commission report warned that New Zealand was not on track to meet its international emissions reduction obligations, and presented an ambitious path to bring them under control and move to an economy of clean energy, including a substantial increase in renewable sources.

At a select committee meeting on Thursday, Energy Minister Megan Woods said that in light of New Zealand’s climate change commitments, burning coal at such levels was “no sustainable “.

The power system was designed to switch to fossil fuels as a backup in times of low renewable energy sources, such as weak hydroelectric dams, she said.

Gas, which produced fewer emissions, was the priority. However, due to supply issues, coal was currently being burned at higher rates.

“The system does exactly what it’s configured for, but I don’t think that’s acceptable.”

The gas deliverability situation is expected to improve over the next year, so there would be less reliance on coal if there was still a dry year, she said.

The multibillion-dollar program, announced last year, would turn a South Island basin into a 5,000-gigawatt rechargeable battery to power the country during periods of low rainfall or wind, ending its lifespan. dependence on gas and coal production.

Water would be pumped into the dam during periods of excess energy, such as when hydroelectric dams need to be discharged.

Woods said planning work is continuing on this and an interim update is expected this year.

Good progress on feasibility, including doing Lidar (3D laser) imagery of the site and engaging with landowners and the local runanga, she said.

“It is moving at a steady pace. If we want to decarbonize, we have to find a solution.”

Woods said there were many in the industry who “openly resisted” changing the use of a renewable source of “dry year” storage, and who would have questions.