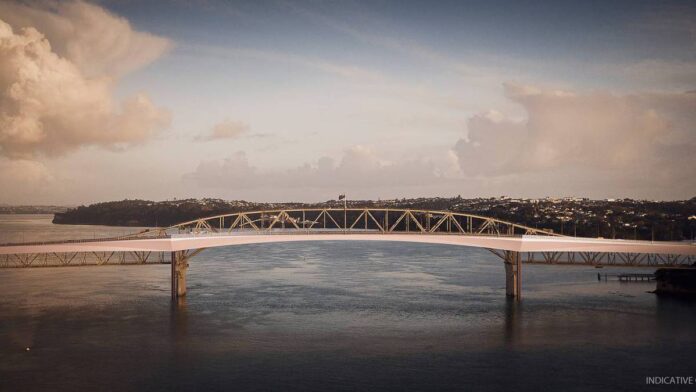 Artist’s impression of the new bicycle and pedestrian bridge next to the existing port bird. Photo / Supplied

A new cycle and pedestrian bridge crossing Waitematā Harbor, estimated at $ 685 million, has sparked rejoicing, disbelief and anger in Auckland.

The government sent Auckland into a spin on Friday announcing that cyclists and pedestrians would have their own bridges across the harbor and that two major road projects would be scrapped.

16 months ago, Prime Minister Jacinda Ardern and Finance Minister Grant Robertson pledged Aucklanders to deliver the $ 1.3 billion Mill Rd motorway and $ 423 million of works along SH1 in the south of Auckland.

“We fund them and we deliver them,” Ardern said at the time.

Transport Minister Michael Wood said on Friday that in light of rising costs and climate commitment, New Zealand’s upgrade program was being rebalanced to increase investment in rail , public transport, walking and cycling.

He said the cost of Mill Rd had risen from $ 1.3 billion to $ 3.5 billion and was in the process of moving from a four-lane to two-lane highway with a focus on improvement. of security.

The $ 423 million worth of work on SH1 soared to $ 1.165 billion, leading the government to scuttle the second stage of the work.

Other Auckland projects in the upgrade program continue, including the Penlink road between Whangaparaoa and SH1, the cost of which has doubled from $ 411 million to $ 830 million.

Robertson said Covid-19 increased construction costs around the world, saying the original upgrade program nearly doubled from $ 6.8 billion to $ 12.8 billion. The government was injecting an additional $ 1.9 billion into the program, he said.

Auckland Mayor Phil Goff praised the latest walking and cycling connection, which is now over 900% more expensive than the $ 67 million SkyPath project referred to by former Transport Minister Phil Twyford in 2018 .

He said the stand-alone bridge is significantly more expensive, but it is a lasting and lasting solution that will benefit the city for generations.

Goff said the changes wouldn’t be popular with everyone, but praised Wood for having to deal with massive increases in construction costs after Covid-19.

“The new package locks in nearly $ 4 billion in important transport projects for Auckland and I welcome it,” said the mayor.

Cycling and climate change advisers Pippa Coom, Chris Darby and Richard Hills have welcomed the prospect of completing the ‘missing link’ in Auckland’s walking and cycling network and the possibility of closing one or two lanes on the existing port for a cycling event.

“Yay! A lawsuit is still on the table,” Coom said on social media.

Meanwhile, South Auckland advisers rant against the removal of Mill Rd and the complete upgrade of SH1 between Papakura and Drury.

Franklin Deputy Mayor and Councilor Bill Cashmore said Mill Rd had been near the top of three successive transportation plans for the Super City, a key transportation corridor for aggregates and other essential goods and needed to serve Drury, which will grow to be Napier’s size over the next 30 years.

“The aggregates will become more expensive due to truck congestion, which will make each project more expensive and there will be more carbon due to the same slow vehicle movements,” Cashmore said.

Manurewa-Papakura advisor Angela Dalton said: “What a catastrophic decision for the south.”

Auckland Business Forum chairman Michael Barnett said it was scandalous to cut parts of the program at the same time as offering to spend nearly $ 1 billion on a cycle path through the harbor.

“There comes a time when the cost cannot be justified and most Aucklanders would agree that at $ 800 million we did achieve that goal.

“The downsizing of Mill Rd is going to have massive implications for congestion and the ability to free up land for affordable housing,” he said.

Modeling in the latest draft regional land transport plan shows congestion is expected to increase by around 10% during morning rush hours by 2031.

During the same period, car trips are expected to continue to increase in line with population growth and the Auckland Council has set a target to increase the share of bicycle trips from 0.9% to 7%.

A new pedestrian and cycle bridge along the Auckland Harbor Bridge

The SkyPath Harbor Bridge project was valued at $ 67 million by former Transport Minister and Green co-leader James Shaw in 2018.

A year later, NZ Transport agency priced a design for SkyPath at around $ 240 million.

Since Labor took office, SkyPath has increased its costs by over 900%.

The 7 km road, planned since the mid-2000s, will be a two-lane toll highway to support a population that is expected to increase by 106,000 over the next 30 years.

The start of construction has been postponed from the end of 2021 to 2022 and is expected to last four years.

The 5.2 km track will reduce congestion between freight and passenger lines.

Under construction and expected to be completed in 2024.

Electrification of Papakura in Pukekohe and new stations

This long-awaited project means passengers will no longer have to switch from diesel to electric trains in Papakura.

A new station was added at Paerata to two new stations at Drury. The costs of the previous station excluded road links, which are now included.

The government scrapped the 21.5 km four-lane highway designed to provide an alternative to SH1 to existing residents of South Auckland and more than 120,000 new residents over 30 years.

It will upgrade the existing two-lane road at the north end with a focus on improving safety and a bike path / walkway. Work on the southern part has been postponed.

Stage 1 of the 6 km widening of SH1 to provide a third track in each direction between Papakura and Drury began in March of this year and is expected to take five years.

The government has abandoned phase 2 for a new interchange at Drury South and improvements to interchanges at Papakura and Drury.