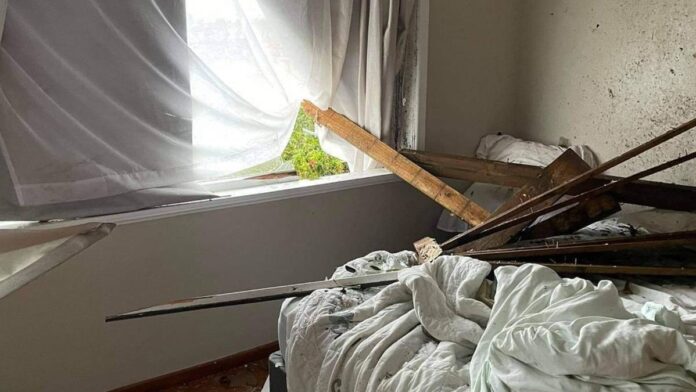 A two-year-old girl was fortunate enough to walk away with only cuts to her face after being hit by a fence panel that crossed the street before smashing the bedroom window and landing on her and her mother.

The little girl’s mother, Ana Johansson, said they were in bed with her husband and their 4-year-old when the heavy rain turned to hail.

Surprised by its intensity, they opened a weather app to see how much rain was falling – but suddenly found themselves in the middle of a scene that could have come straight from a movie.

“Within seconds, something was flying through our window. All I could hear was broken glass.”

What the mother of three didn’t realize at the time was that the object was a section of fence from a house across the road.

“It landed on me and my daughter,” she told the Herald.

“I screamed, my husband got up and moved everything that came through our window and grabbed my daughter and moved us to the back of the house.

“It was pretty scary. I think I was in shock and couldn’t stop crying.”

The 35-year-old Hayward Rd resident said her daughter, who was asleep at the time, seemed more upset by her reaction than by the impact of the object.

“She didn’t make a sound. I think she just reacted to my screams.”

Her four-year-old, who was on the other side of the bed, escaped an injury, as did her six-year-old who was in the bathroom.

“My daughter has cuts on her face from the glass.”

She thinks the sheer curtains and shades helped protect them – slowing the impact of the fence panel as it flew through the window.

“It happened so quickly. I didn’t see the wood go by, it wasn’t until later that I saw it was a fence across the road.”

It wasn’t until they returned to the bedroom later that they realized how much more seriously injured they were from the fence section and all of the glass on the bed.

“One of the posts penetrated the wall of the headboard and left a hole in it.”

It wasn’t just the bedroom that was damaged.

“All windows in master bedroom, family room, ranch slide in living room, some windows in dining room and kitchen were smashed.

“The roof of our house totally exploded, the pergola was torn and some of the posts on the patio cracked.”

She said the fences were also damaged.

“It really is like a scene from a movie.”

Her family has put the children to safety and she and her husband are now focusing on tidying up what they can in the house and trying to make plans for alternative accommodation.