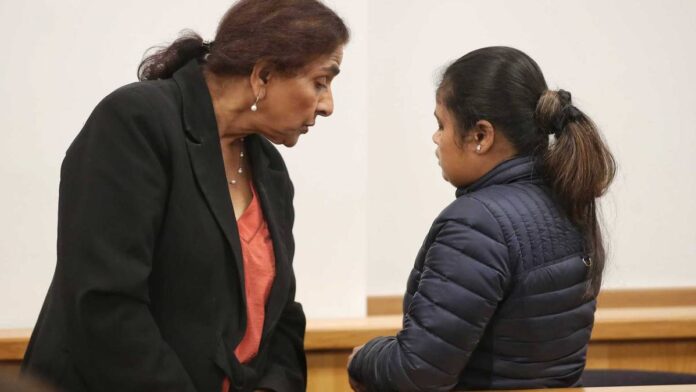 Ritika, right, stands with her back to the courtroom as she appears for conviction in Auckland District Court. An interpreter stands on the left. Photo / Jason Oxenham

A mother will spend two years and seven months behind bars for fracturing her baby’s ribs and causing her brain to bleed, but relatives have shouted their support for her arrest.

Ritika, who goes by only one name, was sentenced today for inflicting injuries on her 8-week-old daughter in November 2018 after sending a series of angry texts to her husband.

The injuries were described by a police officer involved as the worst they have ever seen inflicted on a young child.

As Ritika was taken by police to Auckland District Court today, a woman shouted “You can’t decide my sister’s life” from the public gallery.

“How can you do that?” she cried, rocking a baby. She was then asked to leave on pain of being arrested by court staff.

The family of the 34-year-old had written letters of support to Ritika and denied any offense on her part.

Ritika herself still denies the abuse and neglect, injury and injury charges with reckless disregard – which a jury found her guilty of in April.

Her husband, Sandeep Kumar, was found not guilty of two counts of child abuse and neglect.

Ritika sobbed in the dock during sentencing, turning her back on the judge to avoid being photographed.

The Indian national is in New Zealand on a work visa and her sentence makes her liable to deportation.

His daughter, now 2 years old, had been placed in the care of Oranga Tamariki and her recovery was “underway”, according to a police statement.

She was Ritika’s first child and the family’s first grandchild, and was “the most loved of all,” the court said.

The offense took place at the couple’s home in Mt Wellington.

The baby’s ribs were fractured on or before Nov. 2, the jury heard, and she suffered a subdural hematoma on Nov. 7.

Kumar had left home that day but Ritika wanted to spend the Diwali festival with her husband and baby. He did not respond to numerous calls and texts from Ritika, in which she threatened to harm herself and her baby, the court heard.

Ritika inflicted injuries that resulted in the bruise while Kumar was not at home, but did not seek medical attention until 17 hours later.

At this point, her daughter suffered a skull fracture, retinal damage and began to have seizures.

The baby was transported from a general practitioner to Starship Hospital.

“There she was diagnosed with injuries, including a subdural brain hemorrhage, which could have been caused by the force of rotation, the kind of force applied if a baby was shaken,” Judge Ema Aitken said.

“I cannot find today what exactly you did to cause this significant injury, only that you in fact caused it, Mrs Ritika,” she said.

It was her daughter’s first day of Diwali and “things had not gone the way she wanted them to,” the jury said at the trial.

“You treated her in a totally reckless manner… knowing that you hurt her, you didn’t see a doctor until the next morning,” Judge Aitken said.

“Your treatment of your little girl involved a very serious breach of trust.

“As a mother, she should have been able to count on you to protect her from harm.

“I accept that you love your daughter and this offense could be seen as out of character, perhaps by an inexperienced and immature young mother.”

Detective Inspector Bridget Doell, who was in court today, said the nature of the injuries was horrific.

“This poor helpless baby had broken bones all over his body, including a fractured skull, several broken ribs and broken legs,” she said.

“His injuries were some of the worst I have seen inflicted on a young child.

“What makes it even more appalling is the fact that the child’s wounds were inflicted by his own mother, the person whose duty it is to care for and protect them.”

Where to get help

If you think a child is in immediate danger, call the police on 111.

If you need help or support with childcare, there are a number of partner agencies that can help you, such as Shine or Plunket.