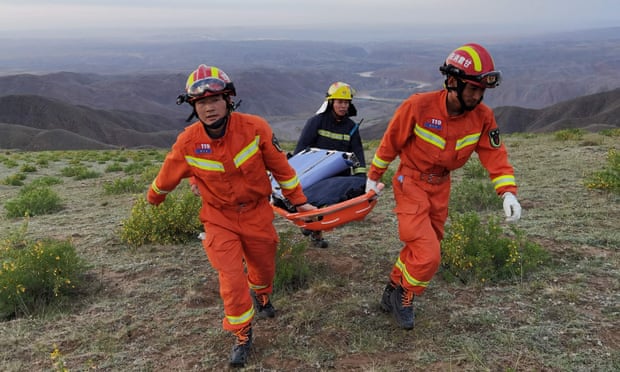 Twenty one People have been killed after hail, freezing rain and high winds hit runners in a 100 km mountain race in China, state media said on Sunday.

Extreme weather conditions hit a high-altitude section of the race held on Saturday afternoon in the Stone Forest of the Yellow River, near the town of Baiyin in northwestern Gansu Province.

State broadcaster CCTV reported on Sunday that the last missing competitor has been found “Have already lost their vital signs”, citing the local rescue command headquarters.

“This suggests that this incident caused 21 deaths in total”, CCTV said. City officials previously confirmed 20 deaths and one missing at a briefing earlier on Sunday.

Baiyin City Mayor Zhang Xuchen said that around noon, part of the ultramarathon course – between kilometers 20 and 31 – was “Suddenly affected by dire weather conditions”.

“In no time, hailstones and ice rains suddenly fell in the area, and there were strong winds. The temperature has dropped sharply ”, Zhang said.

Shortly after receiving messages asking for help from some participants, marathon organizers dispatched a rescue team who managed to save 18 of 172 participants.

READ | PROUDLY SA: VELDSKOEN ON BOARD AS TEAM SA SPONSORS

At around 2:00 p.m., the weather conditions deteriorated and the race was immediately canceled as local authorities sent more rescuers to help, Zhang said, adding that provincial authorities would further investigate his cause.

Huang, who was deaf and mute, won the men’s marathon for the hearing impaired at the 2019 National Paralympic Games held in Tianjin. The marathon organizers confirmed his death to a friend, who was quoted in local media.

The state-run Xinhua News Agency reported that some of the runners were suffering from hypothermia, and Zhang earlier said that eight people were being treated for minor injuries in the hospital and were in stable condition.

Some marathon participants, wrapped in heavy duty blankets, were filmed being put on a stretcher by rescuers.

“My whole body was soaked, including my shoes and socks. I couldn’t stand up straight because of the wind, I was very afraid of being knocked down. The cold has become more and more unbearable, ” a survivor reportedly told local media.

“Coming down the mountain, I was already experiencing symptoms of hypothermia.”

Gansu, one of the poorest regions in China, borders Mongolia to the north and Xinjiang to the west.

Deadly floods and landslides have hit the province in the past, with landslides reportedly killing more than 1,000 people in one city in 2010.

It is also prone to earthquakes.

The Yellow River Stone Forest is famous for its rugged mountain scenery marked by stalagmites and stone pillars, and is used as a location in many Chinese TV shows and movies, according to the China Daily.

Its rock formations are believed to be four billion years old, according to the Daily.

Marathons and extreme sports have seen a resurgence in popularity among the Chinese middle class in recent years.

However, Chinese marathons have often been plagued by cheating scandals. In 2018, more than 250 runners were disqualified from the Shenzhen Half Marathon after being found to be wearing fake bibs or taking shortcuts.

So far, a handful of runners have been banned for life by Chinese sports authorities for cheating.